To tell you the truth, I´ve not heard of your band before! But our goal is, to promote all kinds of rock and metal, especially the upcoming talents. They need the support. My review is soon up on our homepage (it´s in German though). If I was asked, you and your music deserve more attention and so I wanna give you the chance today, to give the people out there chance to learn about your band and music.

How it all began – CELLAR TWINS

MH: let´s start quite in the beginning. I´d be interested to know, how you got you into starting this band? Who´s idea was it and how did it begin and develop?
CT: Funnily enough, Jeff (lead guitar) and Francesco (drums) initially met as members of a very soft French variety band. However, the need for heavy high gain guitars and powerful drum fills was strong and secretly kept growing over the years, until Jeff decided to quit the soft band and asked Francesco to join him for a heavier ride. Then began the long and tedious search for the missing musical soulmates, but eventually, after years of posting ads both at local stores and online, Elodie (bass) and Carl (vocals and rhythm guitar) completed the band. 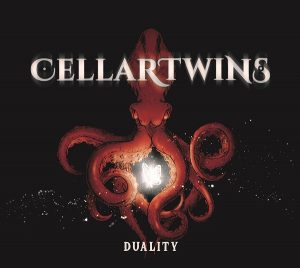 MH: how much time do you spend in the band, I mean are you rehearsing on a regular basis etc.?
CT: We drive CELLAR TWINS as much as humanly possible… And sometimes beyond that. Concretely, we usually rehearse at least once a week and most of our free time goes into the band (whether it be writing, promoting, recording, managing social media, etc).

MH: what was your intention to start with this kind of music? In how far have you reached your goal already or what are the upcoming plans?
CT: The way we do it and why we do it is a balance of both creation and destruction. On the one hand, we want to create something musical and melodic, but on the other hand we use it as an outlet to let go of all the accumulated anger and troubles. Regarding our plans and goals, we managed to create an album that sounds amazing and truly represents us. The next step is now for the world to take a listen!

How the debut album came up

MH: when did you decide to release a full debutalbum after the EP, you did before? Who in the band came up with what part of the material?
CT: From the very beginning, „Duality“ (our debut album) has always been something, we wanted to do. Learning from the writing and recording our 2017 EP, we wanted to make things even better with new punchier songs, that match the depth of the CELLAR TWINS universe. Regarding the writing process, Jeff usually comes up with most of the guitar riffs and melody ideas while lyrics are written by both Carl and Jeff. Then the band works as a whole to turn it all into the best tracks possible. 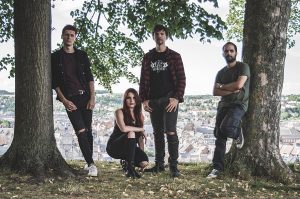 MH: what are your main influences and how do you balance the various kinds of input like from prog to metal? One song strongly reminds me of the canadian band ANNIHILATOR, which is NOT meant in a negative way!
CT: We all listen to different bands and different styles of music so there are many, but the main ones are ALTER BRIDGE, AVENGED SEVENFOLD, VOLBEAT, DREAM THEATER, KILLSWITCH ENGAGE, SMASHING PUMPKINS, RADIOHEAD, KORN, etc. The way we blend all those influences together is purely instinctive and there is no active thought process behind it. If it sounds good, then it sounds good! We just try to add some twists here and there so that the tracks are not always totally self-explanatory, but at the same time we try to keep things from sounding too complex either. We stand somewhere in between. And thanks for the comparison!

MH: are there any plans for some touring, maybe even in Germany or the Netherlands? Festival appearances in 2020?
CT: We already have a couple gigs for 2020, but most of the booking process is still ongoing!

MH: what musicians would you love to share the stage with and/or what band would you like to tour with and why?
CT: All the bands we’re influenced by! Meeting your idols and sharing a common passion is as good as it gets!

Live concerts are great – no matter if small or big

MH: yes I know, your experiences may me just a few so far. Still I´d like to know: festival, club gig or big venue? There are various kinds of gigs to play for a band to play. Small sweaty club gigs, big venues or even stadiums and then these 3-day-festivals in front of 50.000 to 120.000 people. What kind of performances do you prefer and why?
CT: Well, some say, size matters, other say it doesn’t. Based on our experience so far, we had fun both with small crowds in humid basements and with bigger crowds during festivals. As far as we’re concerned, we light up the stage every time, and if the audience has fun, we do as well.

MH: do you have any experiences in playing charity shows like the RAGE AGAINST RACISM-festival in Duisburg? It´s a great thing, positioning itself against racism and of course the participating bands fully stand behind that attitude! Could you imagine to play an event like that? Just asking, as we are starting the preparations soon, as our magazine ist he official media partner!!
CT: Sure! Playing a gig is always nice, but when the event itself stands for something it’s even better! 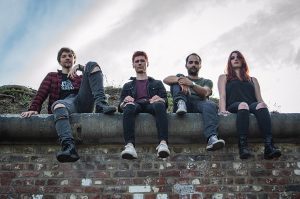 Some videos are coming up soon

MH: the final words is always to our interview partners. Here YOU get the chance to tell the people out there something, that you think is important, regarding music in general, the latest album or whatever. So, here weg go…
CT: We received very positive reviews for our album so far (one even said, it was one of the best albums of 2019!!) so check it out and tell us, what you think! Also, in support to the album, we will soon post several music videos on our CELLAR TWINS youtube channel, so keep an eye out for it!

MH: thanx for sharing your time and all the info. I wish you all the best with the album and the future efforts and hope to see you perform live on stage at some point.
CT: Thanks a lot for having us and thanks again for the opportunity to raise the CELLAR TWINS flag!