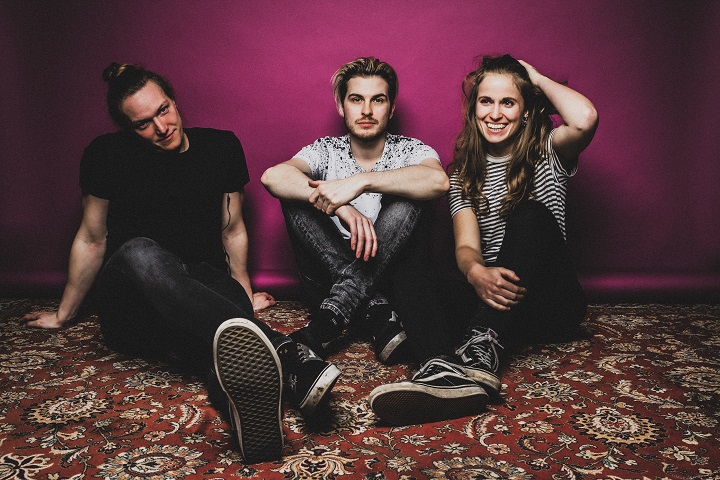 Hello guys, I’m Uwe from metal-heads.de (mh) and i thank you very much for answering me a few questions.

„Bulletproof“ and the music genre

I had the possibility to hear your new and first album “Bulletproof”. My congratulations, it’s very powerful, with good songs and an excellent sound. Merel and Joey Marin are known as formerly members of Delain. The music of Dear Mother is very different from the Delain-sound. Aren’t you afraid that fans of Delain are irritated of that kind of music?

Joey: Thank you so much! No, definitely not afraid! We’re not aiming for Delain fans to like our music, but we would love to if they do! I still have a lot of contact with the fans of Delain, and their reactions are overall quite positive so that’s nice!

Merel: Thank you!! Indeed what Joey said. We’re just trying to create music we personally like and don’t try to limit ourselves in any possible way. Hopefully other people will like our music as well, that would be great haha!

mh: It’s not so easy to describe your music style. Some call it “New Metal” or “New Core”.  How would you explain it to potential new fans?

Joey: I think the genre the 3 of us settled on was ‘alternative metal(core)’. Something like that haha

Merel: We’re struggling a bit with this as well. There are indeed some ‘new metal’ vibes. Especially because of David’s voice, because it’s quite raw. ‘New core’ could be a fit, but I guess we’re not ‘emo’ or ‘metalcore’ enough to fit exactly in that genre. I guess I would put ourselves in the alternative metal corner.

mh: I like all songs of your album. My favorite song is momently “Invincible”. Do you have special favorites on “Bulletproof”?

Joey: Well thank you! That’s so nice to hear 😀 I love invincible as well but my two favorites personally are Symbiose and A Soul For Hire.

Merel: oh wow.. That’s a massive compliment!! Thank you so much! My personal favourites are A Soul For Hire and Means To No War. I like the energy of the last one and I think David’s vocals are badass.

mh: The title of the album “Bulletproof” is kind of a statement. Are you able to stand against negative reviews like bulletproof?

Joey: Of course there will be criticism or negative reactions. That’s part of the job so to say. Music is very personal so not everyone is going to like it. Maybe they had different expectations or they just don’t like it, and that’s completely fine!

Merel: There will always be haters, and of course it’s not going to be everyone’s cup of tea and that’s completely fine. It wouldn’t be a realistic thought to only expect positive feedback, but it would be lovely of course, haha! If you like it, great!! If we don’t float your boat, too bad!

mh: Your singer David ‘Pear’ Hruska did a very good job. He has a strong voice but also masters the soft tones. How did you meet?

Joey: We met David ‘Pear’ Hruska online actually. Merel and I wrote a bunch of songs and decided we needed a singer, so Merel put a message on Facebook that she was looking for singers. David was tagged in the comment section and after we checked him out it was a match, in everything!

Merel: Yeah so basically we met online and then started dating, haha! When we met each other for the first time in real-life, which was at the Masters of Rock Festival in Czech Republic and is a story on it’s own, we already wrote four songs! We are so insanely lucky to have found David. He’s like one of those golden tickets of ‘Charlie and the Chocolate factory’, only there is just one of him, haha!

mh: There are hard times for musicians because of Covid 19. What are your plans for the near future? Do you already have live-dates for us?

Joey: We’re currently exploring possibilities to play live, but there are no dates yet! Hopefully we can confirm something soon.

Merel: It’s indeed a very strange time… We just started exploring possible European support tours options for 2022. And of course we will plan a release show in the Netherlands, so hopefully more news about that soon!

The split of Delain

mh: We can hear different storys about the split of Delain. Would you like to make a statement about it?

Joey: At this moment I prefer not to do any statement about the Delain split. We’ve all done our statements and right now that’s everything I wanted to say, maybe in the future.

Merel: In 2019 I left Delain to pursue my own dreams, which resulted in DEAR MOTHER. So fortunately I wasn’t involved in the split.

mh: Thank you very much for this interview. I hope to see you live very soon. Do you have some last words for our readers and your fans?

Joey: Thanks so much for doing this interview with us! Hope you dig the music, and if you do; check us out on our socials. Take care and I hope to see you soon!

Merel: Thanks a lot for giving the album a spin and sharing the enthusiasm on metal-heads.de! Stay safe and hopefully we are able to visit our Deutsche neighbours very soon!