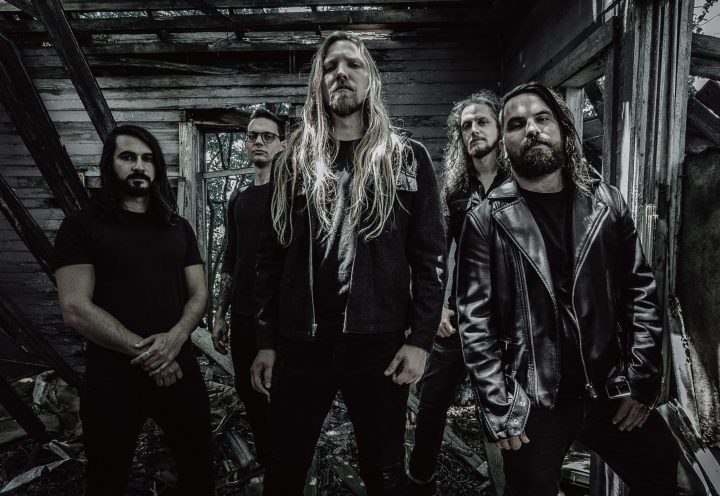 HINAYANA have caused a bang for the buck with their great album „Order Divine“ and Napalm Records saw so much further potential in the band that they were signed there. This collaboration is now bearing its first fruits in the form of the EP „Death Of The Cosmic“ (Review here ) and they taste great. Casey Hurd as mastermind, guitar player and vocalist has taken the sound to a higher level with the support of his comrades and friends.

Casey and a dream of Europe

MH: Hello Casey. When people listen to your music and see a photo of you, most people would think that you are from Sweden or Norway. But you are originally from Austin, Texas. Have you ever been to Sweden or Norway? Which countries or places would you like to visit or give a concert in?

C.H.: I have never been to Sweden, Norway, or anywhere in northern Europe actually, but it‘s always been a dream of mine to visit those places, not just to tour but to go hiking and exploring. I‘d love to tour through those countries but also everywhere across Europe. The mindset towards extreme metal, especially the kind of metal we play, is much different in Europe in general and it is a major goal of ours to tour and play festivals across the continent (hopefully once this situation with Covid19 settles down a bit.)

AUSTIN, the music city in Texas

MH: They say that Austin is a very musical city. It has even been awarded the title „Live Music Capital Of The World“. How do we have to imagine the musical life in Austin? Where and how are you confronted with it everywhere? How did you come to Death-Metal? Do you still have preferences for other music styles that inspire you?

C.H.:Austin has always been a very good place to live if you‘re a musician. Plenty of venues, promoters, hugely talanted artists, and a lively music scene for a large variety of genres. As for metal, the scene here in Austin has grown a lot in the last 10 years. Venues like The Lost Well, Dirty Dog (unfortunately we just found out they closed their doors for good), and Come and Take It Live, are some of our favorites to watch shows and play at.

I came to death metal and extreme metal in general in my teen years after being introduced to bands like Metallica, Megadeth, Pantera, Black Label Society, etc. I remember at the time I had started to hear bands like Children of Bodom and Opeth that had double bass and harsh vocals which really stood out to me as being more aggressive than the bands I had been listening to and I was almost immediately enamored. Metal is my go-to genre (I‘m a simple man sometimes…) but I very much enjoy post-rock, almost anything Steven Wilson has had his hands on, and even some alternative rock like the band Feeder.

Intention of „Death Of The Cosmic“

MH: TEXAS is a sunny state in the USA. Your cover, on the other hand, looks very dreary. The colours are dark. A modern office building piles up in the middle of black trees. The building as a symbol of human civilisation in its dismal sobriety in combination with trees as a symbol of nature. Trees are black without leaves and appear dead. The dystopian feeling is conveyed that human civilisation is displacing and destroying nature. Am I right? Please describe to us in more detail what you want to express with the picture and therefore also with the album.

C.H.: Yes, that is correct. The album cover is meant to represent the brutalist creation(s) of man cutting like a knifes edge through nature, destroying it in its path and leaving in its shadow the fading starlight representing the universal, divine force in the universe. It‘s concept represents a pretty bleak outlook on things in the current paradigm on this planet, and I think the bleak artistic style Travis Smith incorporated fits well with the vision we were trying to convey.

MH: What does nature mean to you?

C.H.: To me nature means the pure, majestic, universal force that exists in a more powerful way than anything man could imagine, whether its a 20,000 foot mountain jutting out of the landscape or the delicate intricacy of a sunflower. The natural world is something far more meaningful than the short time we spend existing within it.

MH: I like these poetic lyrics on the album. They turned out very well. Are you a spiritual person?

C.H.: I‘d say I‘m a spiritual person. Though I don‘t subcribe to any specific belief system or religion, I believe in a higher organization to the universe that I think us humans may never fully understand.

Casey Hurd and his „baby

MH: The song „Sacred Delusion“ for me is the most atmospheric track on the album and creates a tremendous depth. You mentioned that this song took the longest time in its creation. It is also the song you recorded with your colleague Toni Toivonen as a guest musician. Could you tell our readers where the difficulties were?

C.H.: The song „In Sacred Delusion“ took a long time to write mostly due to my own indecisiveness about where I wanted the song to go. I initially came up with the chorus of the song and then formed the rest of it around that. Some songs are just like that, while not being very technical they take time to form and grow and others come together more quickly. I suppose to me, it was a song that I liked enough to be very picky about what parts went where and how it progressed. As far as working with Toni, at that point the song had already been written so it was just a matter of him recording his vocals, which I feel he did an excellent job on.

MH: In the song „Cold Conception“ the mongolian string instrument „morin chuur“ plays a role. Are you a friend of unusual and traditional instruments? Can we expect that such instruments will play a role in the sound of HINAYANA from time to time?

C.H.: I‘m somewhat familiar with different kinds of traditional instruments, and seeing as we were very happy with how the “horsehead fiddle“ turned out on that song, one might expect to hear more of that sort of thing on future songs. That being said the band does not call back to some ancient tradition or specific culture so our use of traditional instruments will have more to do how they sound to create specific moods pertaining to the song they might be used in.

A glow in the dark

MH: The instrumental song „Yet Here I Wait Forever“ is a light, even almost dreamy song. It represents a small oasis in the otherwise rather gloomy songs. What does this track stand for? Is it a little glimmer of hope in a dark world?

C.H.: I‘d say the song represents a sort of dark beauty in the innevitable unfolding of our own self destruction. It has a hopeful sound. It is about being at peace with the bleak surrounding world, and acceptance of the current state of things in the world, giving the listener a breather in the middle of the EP, contrasting the gloomy moods of the other tracks.

MH: It’s pretty hot in Texas. In Austin there is a big lake that offers cooling. When was the last time you were at Town Lake? What’s the best way for you to switch off and find peace?

C.H.: Funny enough I actually don‘t usually visit Town Lake. To me, getting out of the big city and away from other people is the best way to switch off and escape the hustle of my daily routine, which is actually why I prefer to visit Canyon Lake, further out into the country near the small town of New Braunfels, Texas.

We are primarily a German online magazine, but some sections are also available in English. If you don’t want to miss anything from the metal world, subscribe to our free newsletter or follow us on Facebook. That way you’ll stay up to date about everything from the underground to the big boys. If you like to watch pictures, Instagram is the right place for you and our YouTube Channel offers you interviews, unboxings and some documentaries.