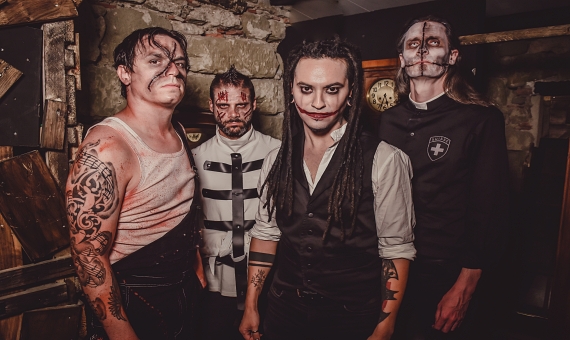 was a crusher, which I had to present immediately in the series HÖRET & SEHET here at metal-heads.de, when I discovered the video on YouTube. However, this was the title song from the last album. Now the new output „Second Life“ will follow on 25.09.2020. Visually, CHAOSEUM definitely causes a stir, as the band members seem to have come from a horror movie. The cover of the album is appropriately illustrated and of very high quality. The artist Gustavo Sazes has done a great job. It won’t help little children to fall asleep, but we are not in kindergarten here, but at „metal-heads.de“. So we start the horror show. Now that we have found the way to hell with the „first step“, there is probably no escape.

„Hell Has No Way Out“

starts off like hell and the drums are pushing forward enormously at first. Melodic guitar leads accompany the powerful beginning. The song is peppered with well-placed breaks and tempo changes and the vocals are also used differently. The guitar solo is remarkable and well integrated into the song. So the beginning of the album would have been perfect. The title song „Second Life“ is also bursting with power and energy. The sound of

is reminiscent of KORN, but they still cook their own little soup. I would say that in the end they go more in the harder direction and give their sound a good portion of gloom. The first single release „Stick Under My Skin“ is an example of what CHAOSEUM is all about. The song plays with quieter passages, building up an appealing tension to change into a pithy catchy chorus. The song ends with brute riffs, wild drums and deep guttural growls. This element is used more often at CHAOSEUM and is an enrichment to the overall concept. However, the two decouplings are not the hardest songs on the album. There are songs that add a touch of „hardness“.

with its dark catchiness also stands out very positively. An atmospheric song, which, besides great hooks, also features a remarkable guitar solo by guest musician Julian Barrett. At the end the song surprises with a smooth final part with acoustic guitar and clean vocals.

„Frozen“ as the last song is definitely the best song on the album for me personally. The song rocks like hell and knocks me out. A very diversified song with great hooks and cool crazy ideas in a crazy instrumental part, which inspires with unusual sounds and comes across damn good.

CHAOSEUM are raising the quality of their debut album even higher. The sound is more mature and powerful throughout the album. CHAOSEUM deliver a well-rounded, high-quality package that can shine with some very remarkable highlights. The band is on a very good path. Furthermore, the whole thing is top produced, whether it concerns the musical production or the media design including a high-quality booklet. If you like the KORN group, you will like CHAOSEUM anyway. Everyone else should definitely listen in too, because it’s worth it!