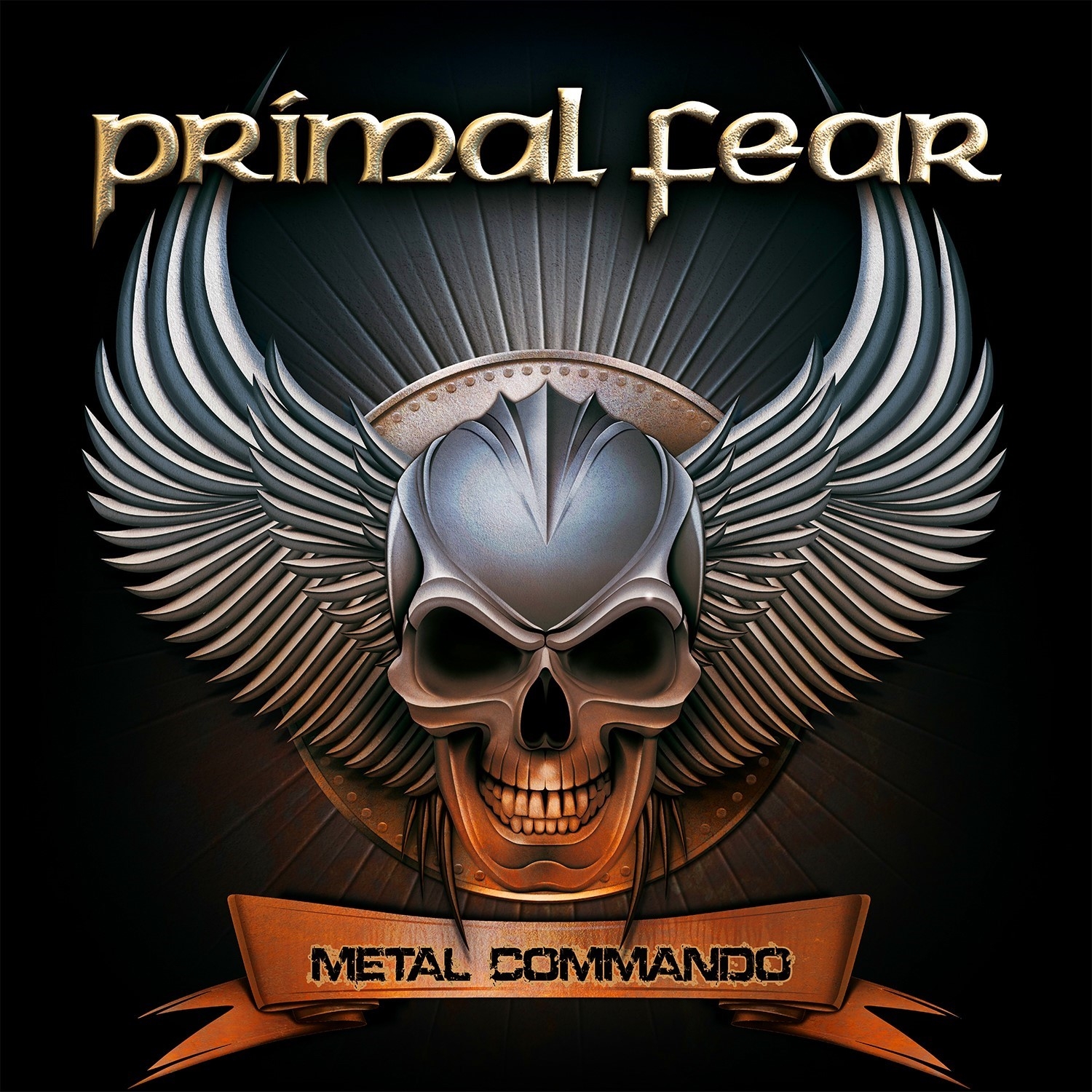 The institution PRIMAL FEAR from Stuttgart (homepage) with its top-class line-up can look back on an impressive discography (12 albums) since its foundation in 1997. PRIMAL FEAR (Facebook) was often successfully represented in the charts. Now the „Metal Commando“ (nickname of the group from old times of American fans on a USA tour) is rolling towards us with a stylish cover. The good old Skull has been polished up for the thirteenth album and wants to fly high with his wings. A motif that every metal fan and biker would immediately put on their jacket. Let’s hear if the winged Skull with his radiant teeth can still snap shut powerfully or only slurp porridge.

offers a damn good introduction to the album as a racy number with hard melodic guitar riffs, great vocal lines and full power. The chorus with Ralf’s characteristic voice is really catching. The guitar solo is first-class, which symptomatically applies to the whole song palette. This makes you thirst for more and the thirst is indeed quenched. By the second song „Along Came The Devil“ at the latest, I have enthusiastically signed up for the METAL COMMANDO and am proud to take part in the mission. „Along Came The Devil“ is a really cool rock number with an enormous heavy impact. The snotty song also has a great groove. Ralf Scheepers puts out the rock tube and cries out excellently.

So you can already say after the first few minutes that there is tangible and high-quality music on the album. Apparently the troupe was in a musicgym to pump up the sound even more, amplify it and give it the final touch. There Ralf apparently also met with Udo Dirkschneider. At least that’s how it sounds when Ralf goes energetically rocky in the high pitches. And fortunately the album is not an example for the fact that you ignite your best grenades right at the beginning and then nothing great follows. Here they even save the best until the end. But more about that later… So far I have noticed the following:

PRIMAL FEAR go to work with a lot of power. And what they do here with their guitar triumvirate (Magnus Karlsson, Alex Beyrodt, Tom Naumann) is already extraordinary and of very high quality, no matter if it concerns the riffing or the solos. You will be rewarded with excellent chords that combine melody and hardness. They also prove this impressively with the third song „Halo“. „Halo“ is a super melodic full throttle number with beautiful flattering vocal lines. In contrast to this there are songs like the dark „The Lost & The Forgotten“ with its more dominant bass (Mat Sinner) and the dark powerful chorus. Then there is the song „My Name Is Fear“, which stands out due to the extraordinary good drumming of Michael Ehré (who joined the band since 2019). He whips the song forward with his double bass. Altogether he does a very good job on the album.

A lot of light shines

on „Metal Commando“. But in my opinion there are also „weaker“ songs. Such songs are for me „Hear Me Calling“ despite the excellent guitar solos…

…and the purely acoustic ballad „I Will Be Gone“ despite the beautiful high-class guitar part from minute 03:00. The songs are of course not bad and nice to listen to, but they have rippled through my ears without leaving such a big impression and without triggering the need in me to listen to it again. But it’s completely different with the epic final track

It seems to be a tradition that PRIMAL FEAR give every album a song with excess length. I personally think that PRIMAL FEAR could compose more epic tracks like this, because that’s what they really do in a fantastic way. „Infinity“ is the outstanding masterpiece on this album. This song conveys a great atmosphere with brilliant melodies. The different tempi and mood changes with a very variable voice of Ralf Scheepers let me get carried away to storms of enthusiasm. The guitar solo part from minute 05:10 is just awesome and from minute 05:50 it gets really galactic. There could be two of such masterpieces on one album. Just the last three minutes didn’t have to be. So the song is only unnecessarily lengthened. I would have liked this sequence better as an outro separated from the song.

PRIMAL FEAR have given their sound a fresh cell cure and pimped it up again. The songs have „balls“ and promise a mature songwriting with great melodies despite all the penetrating power. PRIMAL FEAR are rightly an institution in the field of POWER-Metal and have forged a strong work. So the impressive skull rightly adorns the cover and the title „Metal Commando“ is no cheat pack, but actually a promise. (By the way, Jacob Hansen did an awesome job mixing and mastering it!)

We can also promise something!

Here at „metal-heads.de“ we have much more to offer. If you don’t want to miss anything from the metal world, subscribe to our free newsletter or follow us on Facebook. That way you’ll stay up to date about everything from the underground to the big guys. If you like to watch pictures, Instagram is the right place for you and our YouTube Channel offers you interviews, unboxings and some documentaries.