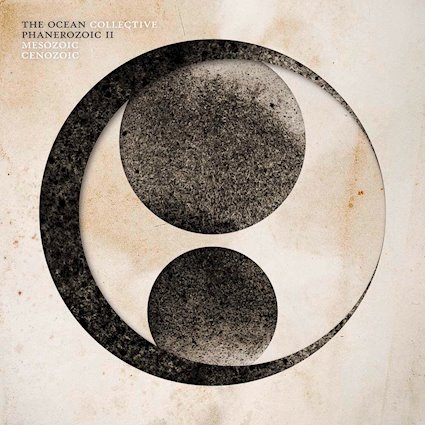 THE OCEAN from Berlin bring a musical monument to the market. Fittingly, they also call themselves THE OCEAN Collective to pay tribute to the amount of artists involved. The motto has always been: Think big! Thematically, they take unusual paths. Already in the ingenious previous album „Phanerozoic I: Palaeozoic“ the different ages of our good old earth are processed. The sound of the predecessor was already monumental, but in the end very straight. The new material is much more progressive and the stylistic device of contrasts is partly taken to the extreme. Between chilling calmness and meteorite impact everything is present. The album lives from intervals that steer the listener through different worlds and moods. But one after the other…

My first experience with the group was the song „Jurassic | Cretaceous“ (It is about the Cretaceous period, where the dinosaurs ruled for a very long time. And they did not destroy themselves as we intelligent people will probably do in the not too distant future. But that is another theme..) with a playing time of over 13 minutes. The video is not so spectacular now, rather hypnotizing. The song was all the more impressive for that. A progressively impregnated monument of metallic notes with orchestral and psychedelic elements. Opposites attract each other. You could also call it that way.

Quiet moments exist next to angry exploding phases. This is not catchy, but still top class. If you like hard progressive refined Metal, you will feel like in paradise here. It’s hard to describe such a gigantomaniac song in all its details. THE OCEAN make use of so many areas to create their sound. They make use of various classical instruments, which are perfectly integrated into the song. But also electronic sounds are processed to create unusual soundscapes in places. An insane rollercoaster of emotions. A masterpiece!

and very demanding is to classify the work of the protagonists. There seems to be an almost inexhaustible supply of original ideas with an excellent sense for creating certain moods.

The opener „Triassic“ begins quite leisurely with a longer instrumental introduction, which very gradually builds up a nice tension. Hypnotic shallow choral singing creeps in until massive chaos breaks out over you, which then interacts with the choral singing. Here the outstanding guitar playing crystallizes directly, which knows to inspire with great solos. But it is inadvisable to emphasize single artists. Through the bench, the highest quality art of playing is offered here.

The third song „Palaeocene“ is probably the most choleric song on the album. Here it’s almost all about fierce, but only almost. In this stormy song there is a moment where you are slowed down from full speed to zero for a short chill-out zone. That’s a damned rough cut that goes through the song.

In the following the song „Eocene“ the album experiences a beginning deceleration. The song doesn’t come across as hard and leads skilfully to the instrumental track „Oligocene“, which lets the listener come down completely and gives you the opportunity to process your impressions of the first part of the album. Very unusual that the band has given this instrumental track its own video.

A portion of madness comes around

Afterwards the album slowly but surely picks up speed again and we arrive at the song „Pleistocene“, which is surprisingly characterised by strings especially in the hard parts and at first alternates with a very melodic almost pop part. A pretty extravagant mixture, but somehow it fits and comes across as cool. Above all you don’t expect the song to develop into a wild fury. Only pure amazement remains. Hear and see for yourself…

The compositions impress with their versatility and sophistication. It is not an album for in between, but a total work of art, for which you have to take your time. The enthusiasm is already there at the first listening, but you will have to listen to it again and again to absorb it completely. There are so many audible impressions coming into the listener’s head that you can’t even process them in passing. It is emotional! It is thrilling! It is gigantic! Here too, I can’t help but give the full score.