Today we from metal-heads.de speak to Christophe Depree, guitarist from the band AFTER ALL from Belgium about the latest recording activities and much more.

Hi Christophe, great to hook up with you. It is quite a while since we met on an AFTER ALL-gig, I remember meeting you in the crowd during a concert in Belgium. Actually I´m very much looking forward to see you play live again some day soon.

CD: Hi Amir, always good to hear from you. If I remember correctly the last time you saw me with AFTER ALL was in 2011 on the Killfest Tour, Köln, Essigfabrik I believe.

Details about the recording process with AFTER ALL

MH.de: first of all, please talk about the situation at the moment, regarding AFTER ALL. How far are you with the recording process and when can we expect the new album?

CD: We always write and record in different sessions, have been doing this since the last two albums. We’re always writing, gathering ideas. When we have three songs ready we, go and record the drums in the studio of our soundguy Bart Vennekens (he is a touring monitor engineer for ICED EARTH, DEMONS and WIZARDS, SEPULTURA among others).

Then we record the guitars and bass at my home studio (Silent Survive Sound) and record vocals either with Bart at my place or a nearby studio. When we have a next batch of four songs, the process repeats and then when have another three or four songs written, same thing again. When we have ten songs recorded, that is the new full album. It usually takes us three sessions over the course of more than a year. At this moment we have three songs written, drums, guitars and bass are recorded, we just need to do lead guitars and vocals. After every session is finished, the files go to Dan Swanö, who mixes and masters it. So realistically, the new album will be finished somewhere end of 2019 beginning of 2020, we don’t want to rush things, as for us the quality of the material is more important, than anything else. We might release a new song digitally though, before the new album is completely finished. (Kind of like we did with the “Rejection Overruled” ten inch released, before our previous full album “Waves of Annihilation”)

MH.de: as I figured, it´s your tenth CD now. Wow! Constant efforts. Please tell us more about the new material and the writing/recording process.

Dan Swanö is mixing and mastering the new material

CD: Yeah, ten albums it’s hard to believe really. Quite an accomplishment, that makes me proud actually. The new material is still very much in the Thrash/Speed Metal vein, but with new drummer Bert and new singer Mike it will definitively be a little different and more diverse for sure. Definitively a lot more melodic on the vocal side.

Here´s one classic tune from AFTER ALL…check it out:

MH.de: in how are you as a guitarist involved in the creation of new material?

CD: Well I usually write between 30-35% of all the riffs and I engineer the recording of all guitars and bass. Actually every note that has ever been recorded for AFTER ALL, I was there in the studio, together with Dries our other guitar player, with whom I started AFTER ALL thirty years ago now. The band is kind of our “baby” so to say. With the writing of the new album I’ve also ventured into writing lyrics (which it turns out I really like doing).

MH.de: what role does making music play in your life nowadays with AFTER ALL being alive for so long?

CD: Music takes up nearly all my spare time, I’ve been playing guitar with AFTER ALL for thirty years. In December 2017 I also joined CHANNEL ZERO, a legendary Belgian metal band as a second guitar player.

3 bands and also some drumming

I also play drums in a more stoner/grunge type of band called RAWDRIGUEZ (rawdriguez.bandcamp.com) four songs are online and I recorded drums for another four songs a couple of days ago actually. I am also a guitar/bass tech for Brussels based cult band LA MUERTE. I also used to do live sound for a couple of bands and produced and recorded an album for one.

MH.de: besides investing a lot of time and energy in AFTER ALl obviously…what do you guys do as a day job for a living?

CD: Our bassplayer Frederik and me both work in logistics, Dries is a self employed journalist, Bert works in a hospital and singer Mike has his own company in IT and tech related stuff. 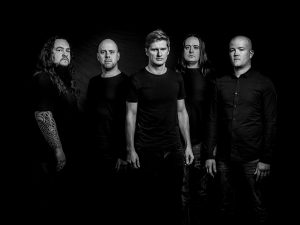 MH.de: in how far is music, also as a consumer (going to concerts, buying CDs, streaming songs etc.), part in your life and how do you try to pass on your „attitude“ on to your kid(s)?

CD: Well as I’ve explained previously, music is really a huge part of my life. Playing live, writing, recording, having fun in my studio and also still buying a lot of CDs and vinyl and going to a lot of concerts. It’s really what makes me tick. I have one eight year old daughter, but I try not to force anything on to her. Good manners and a good education are important to me,  besides that she’ll find her own way in what she likes (music and otherwise).

MH.de: what would you say, if they decided to become a professional and live with the help of making music?

CD: Hmm, … making a living through music is not really an option I think (at least not as a musician). Not in a small country like Belgium and definitively not playing metal. You could maybe work for a record label or a music venue or something. She’ll find her own way and I will always be supportive of course, that goes without saying. If music would be her passion, like it is mine, she could always persue it as a hobby.

There is more in life than music…

MH.de: what else are you interests as hobbies (apart from music obviously)? Which sports, TV series or else?

CD: I like reading books, mainly biographies of musicians or bands. I really like movies, stand up comedy (hooray for Netflix). And I also thoroughly enjoy a good meal and or beer/wine/rum. Not really into sports myself, Frederik and Bert are huge supporters of FC Brugge (soccer team).

MH.de: Are there any plans for touring with AFTER ALL in 2019 yet?

CD: Not really, we are concentrating on writing and recording the new material. If a good opportunity comes up we obviously like to do a gig here or there, but touring won’t be until the next album is released I presume. And even then getting on an interesting tour package is getting more and more difficult these days. We’ll see.

MH.de: what performances do you prefer as a musician – the small club gig, a bigger venue or even a festival appearance? Explain why…

CD: Every gig has its charm, as long as the people are into it. At a smaller club people are really close and in your face, a big venue or festival is also cool, because there are so many people watching you. As long as the crowd is into it and reacts to the music and performance, you get some energy back from them and that’s what you do it for. 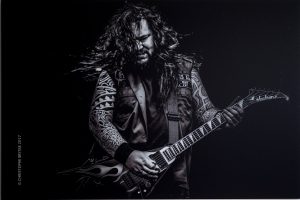 MH.de: the final words always belong to our interviewpartners. What to you wanna tell our readers out there regarding yourself, AFTER ALL or any other subject?

CD: I first of all want to thank you Amir, for your continued interest in AFTER ALL. And obviously also your readers thanks for taking the time to read this interview. Those who want to know more about AFTER ALL can always check our sites (here and there and on their Youtube-channel).

We’re working hard on our new album and always try to top our last effort. Watch out for more news from our camp. And happy holidays for everyone. No Retreat No Surrender!

Great to play live – hopefully some more in 2019

MH.de: thanx a lot for your time Christophe and see you soon hopefully!!