MH.de: Hi Jeff, great to hook up with you in advance to the 2019 edition oft he RAGE AGAINST RACISM-festival in Duisburg in the coming June. By then it will be 4 ½ years since the last live performance I saw from KILL II THIS (that was October 2014 in Flemalle, Belgium, on a local festival). So I´m very much looking forward to that.

MH.de: first of all, please talk about your decision as a band to play on this special charity festival against racism. How did you come you up with this in between the other guys?

JS: I think the thing that attracted us to this festival specifically was that it is an independent festival in an area of Germany that we know well and the festival is coming up in profile quite quickly. We noted that ROTTING CHRIST played this year (see the report here) which is a band we know well and we felt that hopefully we could bring something positive to the festival. 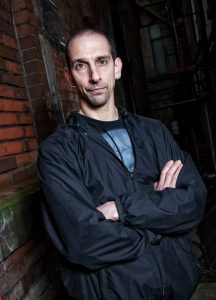 MH.de: if I see it correctly, there had been a longer „break“ for KILL II THIS regarding musical activities. Now there is something going on with the recording of new material!? Please tell us more about the new material and the writing/recording process.

Achieved a lot – no need to prove anything

JS: We are so busy now with our lives and job commitments that we want to keep the band fun. We have nothing to prove and if we release something we want to be proud of what we put out there so there is no rush. My back injury in 2015 really delayed our plans. We came back and played Bloodstock main stage in 2016 and we did a little UK tour at the end of that year. We recorded two new songs in 2017 and released videos and only now are we coming to the end of the process to complete an album.

Here is a video with some of the latest material:

MH.de: in how are you as a drummer involved in the creation of new material?

JS: It is a little different than the old days, when we had alot of time to work on every last detail of a song in a rehearsal room. Now Mark will present a song. Simon will work at home on vocals and I will work at home on drum parts and then we get together to fine tune in the studio before recording. The digital age has changed the recording process, which is sad in some ways however, along with the available modern communications, it has made us accessible to each other, when we live far apart.

A view from behind the drumkit: 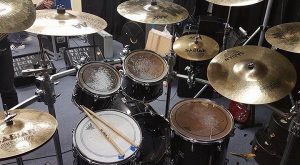 MH.de: are there certain plans yet in how to release the new material? Has KILL II THIS signed a deal yet?

JS: No deals. To us this isn’t important. The album needs to be right to release as it is a big statement for us to say we are back. When we have finished we will look to where we want to go with it.

A change in drumming after a back surgery

MH.de: what role does drumming play in your life nowadays (in between the activities with KILL II THIS)? And how do you stay in shape physically?

JS: I don’t drum much at all nowadays. When I hear my playing from 15 years ago it seems weird that it is me! Practice time has been reduced due to family and work commitments and I have had a battle to get back to anything like where I was with my bass drum technique after my surgery and I think that comes down to having available time too to practice and get stronger. I do alot of bike and gym class work now to keep fit but am seldom actually in the gym doing weights. I am not in bad shape for an old man!

MH.de: in how far is music, also as a consumer (going to concerts, buying CDs, streaming songs etc.), part in your life and how do you try to pass on your „attitude“ on to your kids?

JS: Funnily enough I find this a real joy. I subscribe to Apple Music now for the whole family so we can get any music we like and stream where we want. Two of my kids love drumming and they are doing really well, but I don’t teach them, I let them find their own way. I took William, who is 11, to see IRON MAIDEN in August and he is now totally hooked, while Alfie, who is 6, drums really well and loves his metal. He walks around the house singing songs like „Sun & Steel“ by MAIDEN and at night I give him an education into rock music, when he goes to bed. Last night we played RAINBOW, KINGS X and BLUE MURDER…..he is ALOT cooler than me!

The next generation of drummers?

MH.de: what would you say, if they decided to become a professional and live with the help of making music?

JS: My word it is tough. I feel proud to have achieved, what I have achieved in my career, however nothing came without real sacrifice financially and with life progress in general. There are no guarantees so I insist the kids to do their best at school as a fall back. 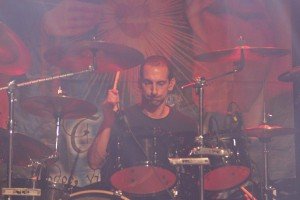 MH.de: you have a remarkable career in music so far, having played for example with PARADISE LOST on some albums and touring with them. Now recently MY DYING BRIDE came up to you and asked you, to record their new album. Please explain us, how that developed and what experiences you made there.

JS: Thank you for your kind comments. A lot of what has happened to me has been through networking. I auditioned for PL in 1994 and got to the last two before the recording of „Draconian Times“. I was devastated, when I didn’t get the job then however we stayed in touch and when I heard that Lee Morris was not in the band anymore in 2004, there were a couple of phone conversations and then I was in doing album pre production in days. I love that band and am so sad not to be part of it anymore. However we are still all good friends and I wish the best for their continued success. We played together again in September at an anniversary show, which was pretty special.

In my time I have been asked to audition for some pretty cool bands, such as SAXON and THE CURE, but I believe you are on a path for a reason. MDB came out of nowhere in August, where they asked their new producer about me when they were looking to replace their drummer and the producer (Mark Mynett from KILL 2 THIS) said actually he is one of my best friends!

MH.de: Are there any plans for touring with KILL II THIS in 2019 yet? And how about yourself and MY DYING BRIDE?

JS: We have a few KILL 2 THIS shows booked in 2019. We will concentrate on completing the album and see where we go from there. The focus for MDB is to finish their new album too and see where things go from there. It has been a very testing time for the band for various reasons, so it is nice to see some positivity for everyone shining through. 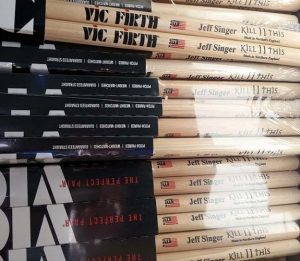 MH.de: what performances do you prefer as a musician – the small club gig, a bigger venue or even a festival appearance? Explain why…

JS: Small gigs are always more nervy as you feel scrutinised. I am lucky to have played some pretty big shows in venues and at festivals and there is such a buzz. I really look forward to doing some of these large shows again. I went to see DEF LEPPARD at Manchester Arena last Wednesday. It was sold out and they were amazing. The atmosphere was electric!

MH.de: by the way…how is your contact to your former band mates from PARADISE LOST and CHINA BEACH or with bands, you´ve toured with like ANNIHILATOR?

JS: Facebook enables everyone to stay in touch and to keep tabs on what people are up to now. So really everyone is more in touch than ever. CHINA BEACH are reforming to perform at Mark Mynett’s birthday party in April and I speak to the PL lads regularly online. Also I speak regularly with people like Randy Black from the ANNIHILATOR days (he is still my hero) and my old drum tech Tommy techs for KAMELOT and an amazing drummer called Thomas Lang…it’s all good!

MH.de: the final words always belong to our interviewpartners. What to you wanna tell our readers out there regarding yourself, KILL II THIS and the RAGE AGAINST RACISM-festival?

JS: We are looking forward to playing in Germany again. I have not played in Germany with KILL 2 THIS for over 20 years, so this will be really special for me and we look forward to bringing our own brand of Mayhem to a new generation of audience.

MH.de: thanx a lot for your time Jeff and see you in June in Duisburg!!