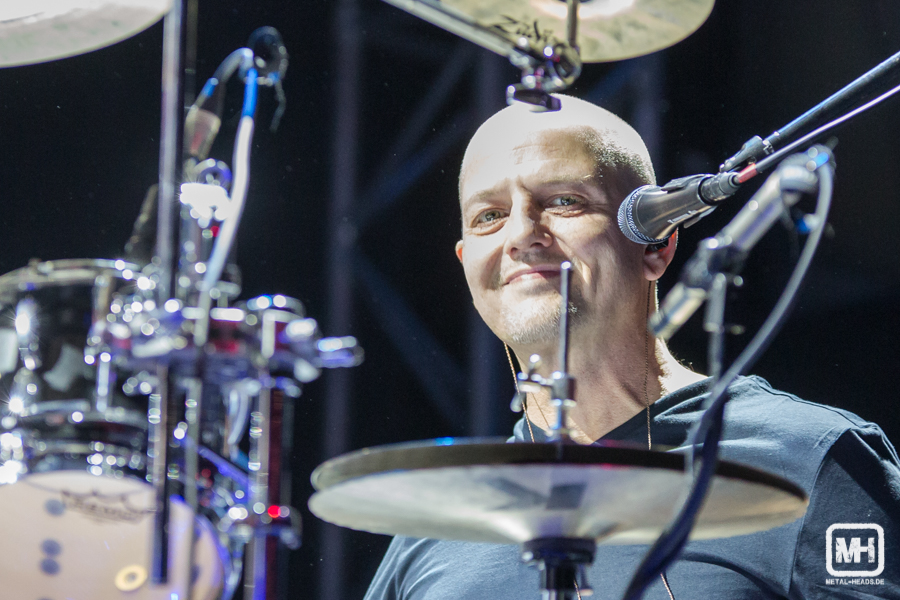 Mike, can you tell us, how and why you became a drummer? Did you play other instruments at first?
I started with drums; from the age of 4 or 5 I noticed, that I really wanted to hit things. I learned a bit of guitar but I knew what my real passion was!

Which music inspired you to become a musician? What kind of music/bands did you hear in your younger age?
RUSH was the trigger, but I have an older sister who liked Queen, The Police and Max Webster, so I was no stranger to interesting music.

Was there a time where you thought about quit playing drums, maybe because you stagnated in getting better?
No.

Which Musicians inspired you as a drummer? Lots of other drummers say Neil Peart was a huge influence on them.
Of course, Neil Peart was my first huge inspiration. I felt he was building his riffs during the course of any given song, so that I could understand them better. He was the king of cleverness and I wanted to play with that fierce crispness and un-quantized humanity more than anything.
And of course I was blown away by Bruford, White, Weckl, Trilok, Buddy, and any other drummer who played stuff I had to figure out.

How did you become the Drummer of SAGA?
They picked me out of a hat that had one name in it.

I listened to the prereleased tracks of Symmetry and like them very much. They sound a bit different to what I expected, but still are 100 % SAGA. Who had the idea to do such a CD?
It was Jim Crichton’s idea, to record something like our „Pockets“ set during Jim’s last tour.

Was it fun to play the songs the new way?
It was fun, but kind of a nightmare to record…so many strange sounds with so many levels. We were moving things around a lot to find a good mix.

How did you manage the recording during this Covid times? Did everybody record for himself or did you meet in a studio?
I actually recorded the drums/percussion parts the summer of 2019, so that didn’t affect me. The others did their parts and gave them to Jim Crichton to mix.

Are you still a part of Spocks Beard? Are you a constant member and do you play on a studio recordings or are you the live musician only?
I’m a member as far as any live shows that come up, and I’d love to be on their next recording if they make one.

Can we expect some new recordings of Spocks Beard? Are there any plans?
No plans that I know of yet.

Symmetry isn’t even released yet, but I would like to know, if there are any plans on recording new songs with SAGA. Maybe someone has written some new material?
There are no plans, in the traditional sense, but in the untraditional sense, there are huge plans, plots and even schemes…mostly about balloons and how to talk to them.

In these hard times where the COVID pandemic destroys nearly 100% of social life, musicians got hit much harder than any other group of people.  No gigs could be played for a long time and we do not know how long this will last. There are not many ways to earn money. What do you do in these times? Do you have some other bands you play for? Do you do online Drum Lessons?
Well I’m happy you asked! I have set up my new studio and have started teaching online from my new home in Munich
I provide custom one-on-one drum-instruction, based on the drummers needs. I’m also recording songs for artists who want me to play on their songs. It’s really amazing to be able to work with anybody and everybody all around the world 🙂

What was your worst moment on stage? Forgot yoursticks, forgot the song, lost your pants?
In Quebec City, I twisted my ankle really badly 15min before the show. I had to close the hi-hat and play the bass drum with my left foot and SAGA did not play Wind Him Up that evening for the first time ever.

Something funny in the end. Is there any funny story you could tell us about things happening on tour?
The first thing that comes to mind is Dusty, our new bassist, and I lost in Nürnberg drunk and on scooters, singing Tired World really loud.

The last words are always for the musician. Is there something you want to say?

Yes. We all need to be together. Peace, Truth and Love.

Thank you for taking the time to do this little Interview with us. Good luck with all the things you do. Hope to see you on tour again soon.