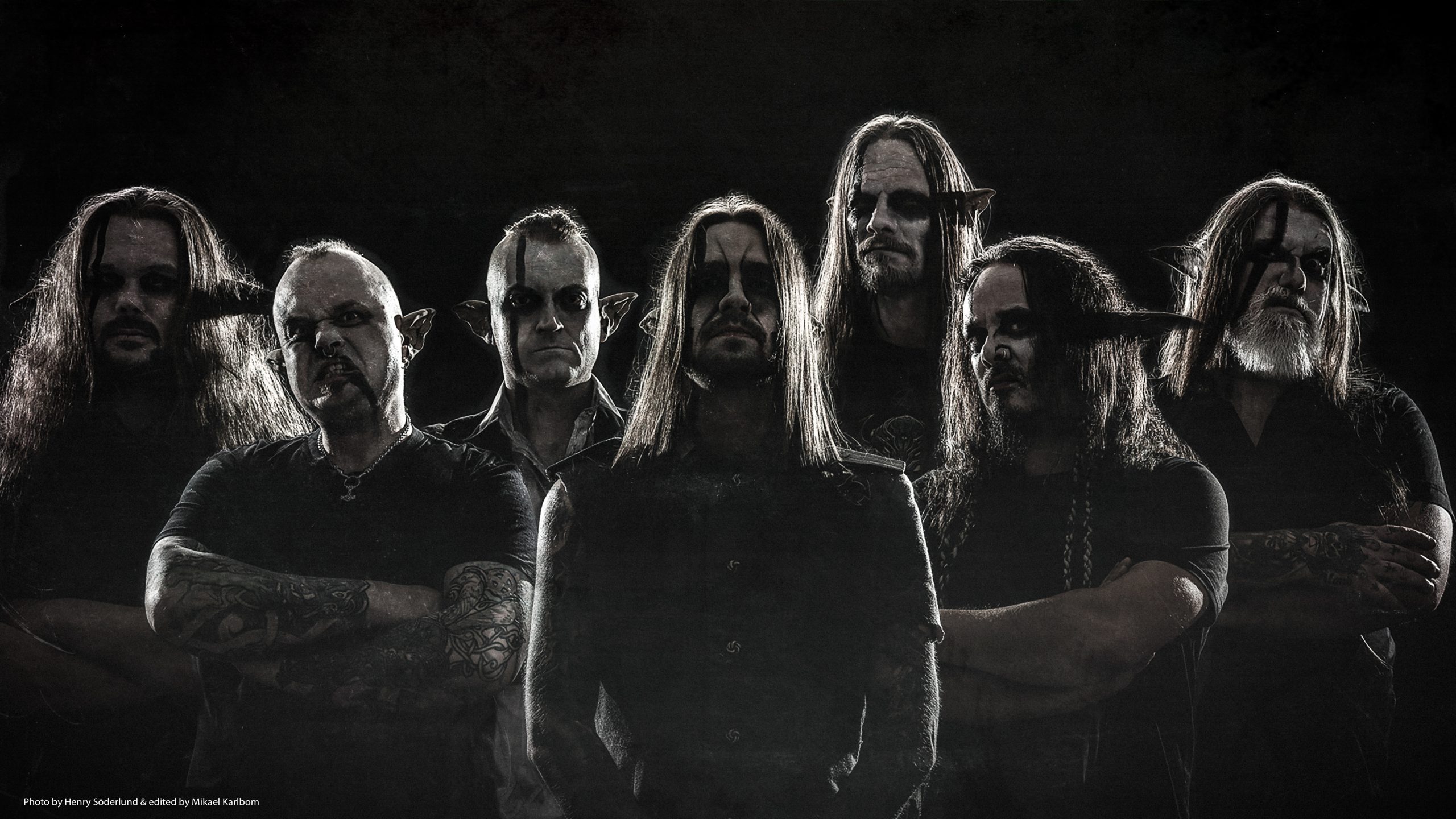 The earth cracks up…

and after seven long years, the trolls pour themselves back over the earth. In hordes, they drift on like a tidal wave, leaving no stone unturned and taking everyone with them without mercy. FINNTROLL accompanies the trolls with 10 bitterly angry crusher anthems from their new album „Vredesväd“. So fuck rules and etiquette, because…

It is time for the troll festival!

The album is introduced like a mega blockbuster from Hollywood. The threatening fate builds up symphonically like a dark black thunderstorm front. This is an introduction that is really worth listening to. Simply indescribably monumentally enormous. You have to hear it at full volume. Awesome! So the intro already shows that FINNTROLL are in a dark mood again. The last album „Blodsvept“ was accompanied by a certain fun and buoyancy. For example the song „Mordminnen“, which in the end was very close to swing music. Now the pointy ears are on dark paths and rush with

through the listener’s ears, which is devilishly fun.

With sinister organ sounds the second track „Att Döda Med En Sten“ („kill with a stone“) makes its way, only to strike directly. And this with a force that tolerates no contradiction. The song breaks out in the blackest manner. The singer Vreth spits out his vocals in the meanest and most aggressive way (and of course this is meant positively). Here the black art rules. Lovely, flattering and seductive vocal arts have never been a matter for FINNTROLL.

Take the song „Forsen“, for example. You would always recognise it by its bizarre style. Tempo-wise moderate, very melodic. These sawing riffs are as unusual as they are fascinating, so that they immediately take root in the brain. The integration of folklore elements is phenomenal. Accordingly, the video has been staged in an unusual and special way.

For the most part, however, the songs on „Vredesvävd“ go stringently forward. Despite its black vein, the full-throttle folk metal seems catchy and makes for a great mood. If one draws a stylistic comparison to other albums of the band, one moves between the albums „Nafödd“ and „Nivelfind“. On „Vredesvävd“ black angry folk metal storms into your face like you can’t do better. This blows your brains out. Want an example? No problem:

Well, every wild boar will flee in fear when the FINNTROLLs roam the forest. Nevertheless FINNTROLL does not ignore the melodic aspects that make up folk metal, so that of course despite the dark swedish lyrics a certain lightness and also exuberance resonates. The song „Vid Häxans Härd“ (witches oven) is no exception. The beginning feigns a ballad with lovely acoustic guitar sounds, just to start the next rage. At the end of the album it gets cosy, because with „Ylaren“ a real mood maker is at the start, where you can take each other in your arms and sway heavily. The chorus invites you to sing along. At the end the song picks up speed again and leads the album to a worthy finale.

FINNTROLL takes sound to a higher level with new inspirations. The (folk)-symphonic part has got other dimensions and gives the sound a fulminant and vehement appearance. But they are still unmistakably FINNTROLL.

Who wants to stand up to the folkloric wrathful frenzy? Nothing and nobody! FINNTROLL makes a merciless march through and celebrates a troll party that will be talked about for a long time to come.

What remains to be said….

We are primarily a German online magazine, but some sections are also available in English. If you don’t want to miss anything from the metal world, subscribe to our free newsletter or follow us on Facebook. That way you’ll stay up to date about everything from the underground to the big boys. If you like to watch pictures, Instagram is the right place for you and our YouTube Channel offers you interviews, unboxings and some documentaries.