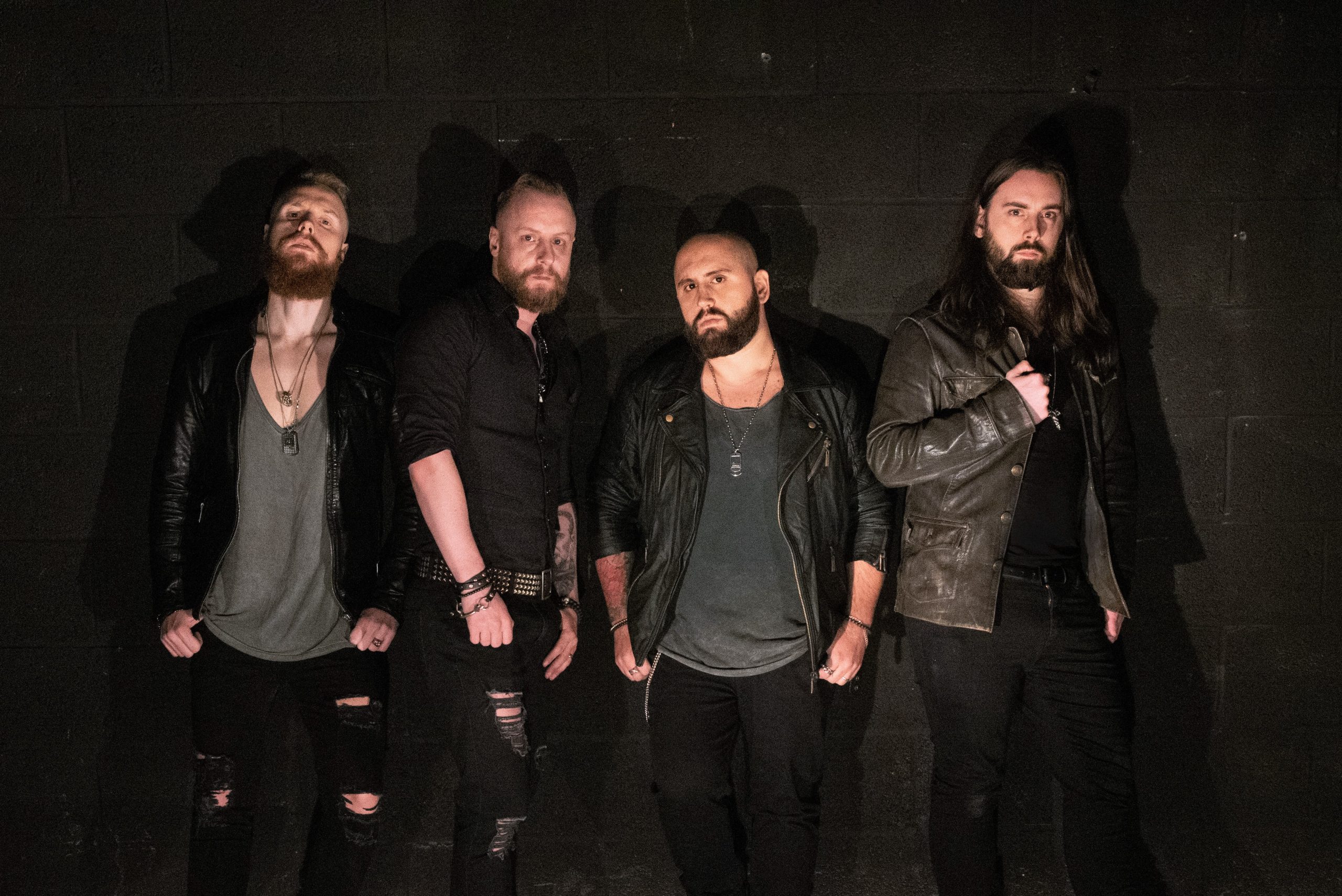 DAMNATION ANGELS Interview with Will – The english version

I had the honour to talk to Will (songwriter, guitarist) from DAMNATION ANGELS about the new album „Fiber Of Our Being“. Learn more about the very interesting background of the album.

MH: Hi, Will. Now you’ve achieved it. The new masterpiece „Fiber Of Our Being“ is officially available. After so many positive reviews all over the world in advance, the fans were more than excited and couldn’t wait to finally hold your album in their hands and listen to it. And I can sympathise with them. The album is absolutely top class.

Problems of our time

MH: How did you celebrate the release of your album? Could you even celebrate together in times of the cursed Corona virus?

WILL: A few beers were consumed in the sun within a safe distance of each other!To be honest though the work continued on that day, with the album being a self-release this time we had little time to celebrate really, if anything we were busier than usual!

MH: Now you’ve been working on the new album for sooooo long time and then it’s finally finished. What happened then? The pandemic crisis came! After such a long time you’re really hot for gigs with the new material and new singer. What do you think? How do you put away this frustration? What are your plans in these uncertain times?

WILL: It just felt like one thing after another to be honest, we were ready for an April release this year but that wasn’t to be. We could have released it then but we actually thought it would be better to wait for the worst of the crisis to pass. In a way it gave us just that bit of extra time to build the album up with a great promotional campaign however obviously shows are now delayed and need to be planned a long time in advance. Right now our focus is pushing the album as much as we can and giving it the release it derserves.

MH: Many bands have postponed the release of their new albums. I can somehow understand that, but I also think that especially good music is incredibly important in difficult times and can help in times of crisis. I am glad that a lot of fantastic music has been released this year despite Corona. And by the way I would like to mention that a lot of fantastic music came from England. As a musician with your own band, do you still have an overview of the music market? Or are you so fixated on yourself and your band to finish the new album?

WILL: You kind of have an idea of what is going on around you, especially with what is being released at the same time. I also think it’s important for music to be released now as well, it’s been a terrible year so far and I think people need something positive in their lives. If people look back on this horrible year but then think „oh but atleast Fiber Of Our Being came out“ I’ll be happy!

MH: Your album cover fits the musical content perfectly and is a visual highlight. What is the idea behind it and who created it?

WILL: I had the idea for a while now but struggled to find an artist who could actually create it. Thankfully the amazing SaberCore brought the vision to life! The idea behind it is basically the pieces that make us up are out of order. Something is not quite right. It reflects how we are advancing as a people and with those steps we are losing ourselves. The pieces of the puzzle are skew.

Seek and ye shall find…

MH: In the meantime you had to find a new singer. What were your requirements? Did you have certain ideas about a new singer? So how did your search finally take place? Why did you choose Iggy, which in the end was the shot in the bull’s eye? He is a gifted singer!

WILL: First of all we wanted someone with a serious pair on them, a strong rock voice. A Coverdale. A Ronnie James Dio. But also with the range to be able to sing our past/future songs. You’ve heard the key change at the end of „Fiber of Our Being“ haha. So not too much to ask right?!

We had a lot of auditions actually from all over the world, a suprising number. Iggy had us from the first note he hit. He improvised a massive high note at the start of our track „The longest day of my life“ and it was ridiculous. I was like we have to get this guy …haha

MH: Let’s shed some light on the musical concept of the album and the meaning behind it. DAMNATION ANGELS stand for symphonic progressive metal. What fascinates you about this genre? Which bands or musicians have influenced you in this style of music?

WILL: Even though we get categorised as progressive metal it’s not on purpose so we don’t really have any progressive influences at all and we never really have. Our influences come from classic metal/rock bands like Metallica, Maiden to bands like Nightwish and Within Temptation. However, I just write what comes into my head and go where the song takes me. What fascinates me about the genre is the emotion you can inject and the stories you can tell. The combination of metal and a soundtrack so to speak can evoke more emotion than any other genre I think. The progressive element comes in when you tell a good story, you need the twists and turns.

MH: Please name me three favourite bands of yours that have absolutely nothing to do with symphonic metal!

MH: How do you approach a monumental song like „Remnants Of A Dying Star“ for example? Do you have several ideas directly or does the song build up around a certain idea bit by bit?

WILL: Long songs are strange and have become somewhat of a thing for the band now, being able to write a „short long song“ is a talent haha. If you listen to our longest songs you’ll notice a similar thing, they all have clear cut sections so to speak. It still has to retain a structure you can follow and one that makes sense to the listener. Most importantly it’s still got to have a great chorus. All the elements have to be there or else the listener just gets lost. It also has to build to a great climax, if you play all your cards too early you’ll lose the listener. So with Remnants for example we add more harmonies, more synth and more guitars towards the end of the song to really build to the climax.

MH: The title „Fiber Of Our Being“ is fundamental. You deal with human existence and the human soul. The title song  denounces the fact that with every supposed stride people are getting closer to their end than to improve the future. What is this statement based on?

WILL: It’s questioning where we are going. Are we going too far with technology? It’s the whole Icarus Syndrome all over again. The album as a whole questions the path we are taking and where we will end up.

MH: „Rewrite The Future“ deals with the often-existing desire to change the past, to return to a point where you turn a wrong decision into a right decision. It’s an understandable wish that I’m sure everyone has had at some point. But isn’t it true that we also have to learn from our wrong decisions?

WILL: We certainly do, our whole lives we are learning. It’s like with music, I feel like I am always learning, almost everyday.  There’s always something you don’t know and a way in which you can improve. With this album being our first self release since the e.p back in 2009, I had a lot of learning to do to make sure we had a strong release digitally and physically. I’ve learnt a lot through this process!

MH: The songs intertwine thematically. For example, we have „Fractured Amygdala“ and „Greed And Extinction“. The amygdala is a region of the brain that is said to be responsible for emotions such as fear or anger. What’s the song about? For example, are greed, power seeking and extinction the result of a disturbed brain region or do we have to admit that these aggressive behaviors are part of the human being?

WILL: That’s a tough one, one I don’t think I can answer! I can say though that the song „Fractured Amygdala“ questions if a person can be forgiven for their actions if it is already built into their genetic make-up. Defects such as the inability to control fight or flight and fear. Greed and Extinction re-explores the link between human progression and our inevitable demise.

MH: Do you believe in a higher power or in a God who controls human destiny, or do you think that we are basically responsible for our own destiny?

WILL: I think we all like to believe there is something greater at work, a higher power so to speak, however I’m not sure. I’m like Fox Mulder, I want to believe haha. However until I see something I will remain skeptical.  I do think we are in control of our destiny and I do believe that if you want something enough and stick at it, work at it you’ll get it. Shia LaBeouf said it best, „Don’t let your dreams be dreams, just DO IT!“

MH: Finally, let us return to very earthly things and come to the simple question: Will the album still be released on vinyl?

WILL: I get a lot of questions on this. It all depends if the demand is there. I’m starting to believe it is after all the questions I get! haha So maybe just maybe….

Thank you very much for answering the questions. I wish you all the best for the future and much success.

WILL: Thank you for the great questions and your time!

HERE you can finde the german version of the Damnation Angels Interview!