Metal-Heads.de: Hello, I’m Oliver from metal-heads.de and I’m glad that I may ask you some questions. I had the opportunity to make a review of the current album “The Endless Mile” and I think it’s a really good one – when you know the originals. I hope you have some fun with my questions. Let’s start.

On the occasion of the tenth anniversary of your first album, you have published an album with new interpretations of old songs. These do not correspond to your usual musical style. How did you come up with this idea?

Kim Benzie: We’d previously had a small attempt at stripping back DLC songs for some bonus content but it was always on a tight timeline and no budget and we’d always talked about trying this as a full-length album and diving in as deep as we do on a regular DLC album. Being intense within a spacious musical setting is a huge challenge for us as we operate the most confidently at maximum velocity, so it was also a challenge for us to become a completely different band for 1 album.

MH: Didn´t you fear, that you could scare your loyal fans with this new musical style?

Kim: One great thing about the people who love Kim is they are pretty open minded as long as it’s quality. I feel like over the years with a few songs on the heavy albums we ventured into this world for brief moments and the people seemed to love it and this gave us permission in a way to do this without fear of judgement. Also, internationally we get categorised often as a metal band where in Australia we are part of a completely different genre that is uniquely Australian. Our shows here aren’t an ocean of black t-shirts and metal horns, they are full of people from all walks of life. 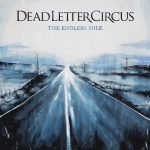 H: When listening to “The Endless Mile”, I sometimes had to think of Maroon 5. Have you heard this opinion from another side? What is your own opinion?

Kim: Never actually, ha. I don’t think I could even tell you a Maroon 5 song. It’s black metal right?

MH: Do you play “The Endless Mile”-songs on your gigs? How are the reactions of the fans regarding these interpretations?

Kim: We did a really interesting tour here where we toured the album before it came out and made the whole thing an almost surprise for the people at the shows. We released 1 song as a teaser so 99% of the set was completely unknown to them so rather than sing alongs and dancing it was us and them in stillness with basic lighting sharing space.

MH: Now Australia is just as far from Germany, as you can get. You were already on tour in Germany. Can you remember anything about Germany, and if so how did you like it?

Kim: I love the genuine straight up attitude of the German people, truly some of the nicest people I have met travelling the world. I really loved the shows we did there, the vibe was intense.

MH: When you are on tour, what do you miss the most?

Kim: I miss my family the most.

Kim: We are working on a new album right now that will hopefully bring us there in the not too distant future.

MH: By the way, if the weather is beautiful, it’s time for a BBQ. I have heard that BBQ has a great tradition in Australia. What do you traditionally put on the barbecue? Can you give our readers advice about a perfect barbecue, e.g. what tastes especially good?

Kim: No pork for a start. We are very beef orientated here and have super high-quality steaks. You can’t have a barby in Aus without sausages and a Beer in hand also. If I said one thing that is a must it would be a Sausage in bread with lots of butter, onions and too much tomato sauce and it must be dripping on your hand when you eat it.

MH: On your Facebook page I read the comments about the death of Chris Cornell. It has hit you hard. How did you hear about his death?

Kim: Chris was a super inspirational character in my life from providing the soundtrack to growing up to wanting to become a singer. In my teenage years especially I found confirmation in his lyrics that helped me with my own battles with my internal darkness and struggle to fit within a world that doesn’t feel natural to exist within. The way he laid his battles out plain to see as an offering to others, like a signpost inspired me to be honest with my art and attempt to do the same lyrically. There is a real tendency to want to be cryptic when writing poetry that is heartfelt and based around your own flaws, he didn’t hide anything. I think of the 2 people who have passed in this industry that truly rocked me it would be Chris and Dimebag.

MH: Last month, you signed a contract with BMG Australia. What do you expect from this deal?

Kim: BMG are a killer team of young go getters so I’m hoping they find us some awesome opportunities.

MH: Last question. Can you tell our readers about your new album? Is it true that it will be released this year?

Kim: We are 1 week away from beginning recording so if all of the business side of things goes smoothly afterwards like unifying releases around the world then yes!   If not early next year.

MH: I thank you for your time and hope you enjoyed my questions.

Kim: Thanks so much for the chat Oliver!