metal-heads.de did besides the daily reviews and pictures of each band, who played on the NORD OPEN AIR FESTIVAL 2017 also some interviews with bands like Prong (click HERE for more) and the headliner on Friday July 27th 2017: Skindred. In this article you can read our interview with the band.

Read? Yes right! It was planned to do a video interview. A drunken visitor of the festival thought it was funny to throw beer on some of the photographers during them taking photos of the performing bands. Unfortunately, the beer hit my filming camera and broke the storage chip – with the full interview on it – down. What you can read here based on what I could save from the storage chip. But we guarantee to repeat for our readers (yes, YOU!) the interview with the band when they will come back…

For this interview we put all regular Skindred records, albums from the bands past, the new record and bands which played an important role during the career into christmas paper and let them unbox it in front of the camera. While they unbox it, I ask some stuff about the record. Get it? If not, check the interview with Brain „Head“ Welch form KoRn, this is what we also did with Skindred.

Fun with Mikey and Arya 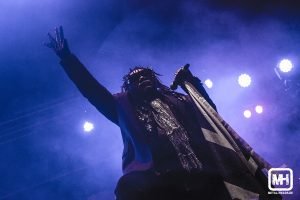 What I can say about the interview and the guys is, they are still one of the nicest and funniest bands, I have ever met. The first time I saw and met them was back in November 2008 on the Eastpack Antidote Tour in Oberhausen. They played in front of less than 200 people as the co-headliner. After the show we talked a bit around their merch booth. What I also remember was, how grounded and nice they were. Very nice! Now, nine years later nothing really changed, except that they released many many good records, did sold out shows in Germany and established themselves as one of the hottest UK exports.

Mikey was ready for the first pick…and…he unboxed the Dub War album „The Dub, The War And The Ugly“

*All people inside the tent were laughing*

Me (still laughing): Oh no, the person who could tell us something about this record isn’t here, so guys can you tell us what you know about when you heard about Dub War for the first time?

Arya (also laughing): Haha yes! I was very young, when I got in touch with Dub War. I guess, I was around 20? Or in the end of my teenager years? I don’t know, but I liked their style and the patterns you know? Benji was known for his talent. Do you want to add something Mikey?

Me: Okay, we skip that record because Benji could tell us more about it. Anyways, please pick another one… 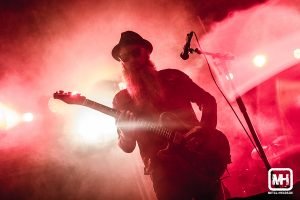 Me: This question is usually a random, boring and stupid one, because it is so odd, but what does the title mean?

Arya: I really can’t remember that, but it sounded cool. Benji could tell more about it, I think…he came up with the title.

Me: The record is more like an E.P. why didn’t you record a full LP?

Arya: It’s more like a mini record with 8 songs you now? An E.P. consist of 4-6 songs, but I know what you mean. When we wrote music around that time, our shedule was very very full of touring and we wanted to release something and we didn’t want to wait so much. 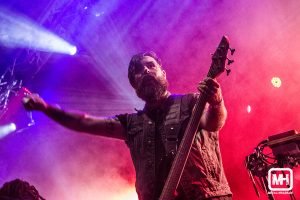 Arya (laughs): If you play in this band, you are always „Under Attack“ (everybody laughs). We are goofing a lot around, but what the real meaning of the lyrics are, I can’t tell you, Benji is responsible for that.

Me: You changed your label. Now you are on Napalm Records, how does it feel to work with them?

Arya: Oh yeah, great man! They are incredible and let us do, what we want to until a specific point you know?

Me: Yeah, I saw that you also released a DVD with the Volume record in one package. Do you think, you will release a Live-DVD of Skindred in the near future?

Arya: Oh, I like that idea! That would be great! But we would think about a special place for it? Like will it be a festival? Arena? In UK? Germany? Or Amerika?. But yeah, I will keep this in mind and discuss that.

Me: Or what do you thing about recording a special show, where you perform a record from the first to the last song? Or maybe do a tour?

Me: Or maybe to release all your records on vinyl! Vinyl is on the rise and you could do a nice box with all records in it.

Arya: Uhh yes! That would be great!

Mikey: I love that idea! We never thought about it! But we will! So let’s unbox the other records! All! NOW!

After they unboxed all records…

Me: You did a tour with them back in 2003/2004. This was a very dark time for KoRN and some of them struggled of very hard drugs. How was the surrounding and climate between the band members?

Arya: Yes it was a dark time for them. We didn’t know what’s going on, because we weren’t so close to get an idea, you know? But it was a bit strange, every single band member lives in a single nightliner. But I can not say something serious about the whole situation.

Me: Would you say, this tour was a door opener for you in the states and the reason you sold over 300,000 copies of „Babylon“ in the US?

Arya: Yes! I mean, we played very big shows in front of a lot of people. It was also a different time.

Time is running out…

Me: Do you have plans for the next records

*All people inside the tent were laughing*

Arya: Hmm…what do YOU want to hear?

Me: I like it fast and heavy. Like Roots Rock Riot, but this it would be nice to hear just guitar, bass, drums and vocals! Everthing should be heavy and hard.

Arya: I know what you mean, but it will be hard to do that, because everybody of us wants to do something different. We will see!

Me: Or you maybe play Roots Rock Riot from the front to back on an anniversary tour!

Arya: I love that idea, we´ll talked about it, we will see…