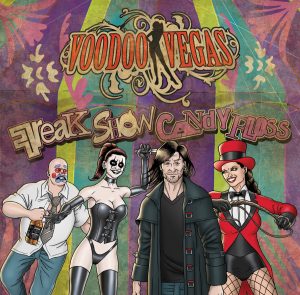 Metal-Heads.de: Freak Show Candy Floss is circus oriented. How did you come up with this idea? Is life like a circus to you – hilarious till crazy?

Lawrence Case: Freak Show Candy Floss, comes from the idea that traveling and spending time on the road only to play for a few hours makes us Freaks, and the Candy Floss is time we spend on stage, it’s here, tastes so good then it’s gone so fast.

MH.de: The Killing Joke video is a little bit crazy. Who had the idea for that? All your costumes are suitable for Halloween. Did anyone of you have this idea, too? And Lawrence Case had really sacrificed his beard for the video? But as compensation he was really „The Joker“. What is this for a feeling to be the real „The Joker“, Lawrence?

Lawrence: The Killing Joke video was my idea. So many bands make videos with themselves just standing in front of walls inside broken buildings, I wanted to make a video that was different. I think we got that with Killing Joke. Our director Richie Adams captured the vision inside my head. I grew my beard for 2 months for the video, to become the Joker it was worth having it shaved off.

MH.de: By the way, Lawrence said in an interview, that Freak Show Candy Floss was written completely by the whole band. What had changed between the previous songwriting? Did the new line-up had a positive influence within the band?

Lawrence: This album was written with the whole band, Jon Dawson bought a very positive influence in the writing, and in this album Meryl wrote big parts of at least 3 songs. On the previous albums only Me, Ash and previous guitarist Nick wrote the songs.

MH.de: The album was recorded in the Los Rosales Studios in Spain. How did you come up with that decision?

Lawrence: Los Rosales studios is our producer Will Maya’s studio. We wanted to get away to record this album, and what better place to go than northern Spain. Recording the album in Spain created a lot of positive energies to record this album. I think it’s safe to say we will record album number 3 at Los Rosales.

MH.de: Voodoo Vegas was on tour across Europe for two years. You supported great musicians like Joe Satriani. What did you learn from the other bands? How was the reaction of the audience on your gigs? Which countries impressed you much, and why?

Lawrence: I think it’s more of the case that we learned our craft at the smaller shows we’ve played. When we played with Status Quo and Joe Satriani we were ready to go and put on a great show. Voodoo Vegas really pride ourselves on the fact when we play we create a lot of energy and make a lot of new fans. Germany always impresses us, and last year Slovenia and Portugal were amazing.

In fact, anytime we are playing outside of the UK it’s incredible, we love it.

MH.de: When you all are on tour, do you ever take the opportunity to see more of the countries or the cities? What are your activities to avoid boredom?

Lawrence: No, we don’t normally have time to see other countries or visit the sites. Last week we played in Koblenz and we did get to see the German Corner.

To stop boredom in the van we mostly watch movies, and write music.

MH.de: On your homepage, the question „If Voodoo Vegas Could Tour With Any Band Who Would That Be?” is answered predominantly (2 out of 5) with Aerosmith. I think you could forget this plan, because Aerosmith will go on a farewell tour. I think Meryl and Lawrence will be a little bit sad about this. But Jon can be happy, because a tour with Airbourne is coming closer. What are your views to that? Meryl and Lawrence, will anybody of you go to an Aerosmith gig for the last time?

It could be that I’ve got a solution for you. What about the Download festival in Donington? They will be both playing (Aerosmith and Airbourne) there. That would be something for you, or not?

With which band would be Ash or Mike preferably go on tour? This question isn’t answered from both.

Lawrence: This is a huge question, I think we are just happy to tour with anyone, play big shows and build up our fan base.

I won’t be going to see Aerosmith, in 2007 I was backstage at the show in London and then 2 days later I was in the front row of their show in Dublin. If I to see Aerosmith on this tour it can’t be better than that. So I am happy for my memories of the 2007 tour.

MH.de: I think your music fits perfectly to be played on festivals. Will we have the chance to see Voodoo Vegas in Germany live and open air?

Lawrence: Yeah we have 2 German open air festivals this summer. In June we headline Let The Bad Times Roll in Manslaght North Germany, and in July we headline Rock Am Rothenburg. Here are the bands exact dates Germany below.

MH.de: I read that drummer Jonno Smyth had quit the band recently. Mike Rigler was found only a short time later as his successor. What were the reactions on the withdrawal of Jonno inside the rest of the band? Do you know his motives, and if yes, can you reveal them to me and our readers?

In the meantime the band played some gigs with Mike on Drums. Did he do his new job well? Does a gig feel different with Mike behind the drumkit?

Lawrence: All I say is it was a shock Jonno left suddenly the day before a show with no notice. We were not very happy about that.

We found Mike within 2 hours of Jonno quitting, he has fit right in, he is an excellent drummer, a great musician, and an all round nice guy. I don’t ever think the atmosphere in Voodoo Vegas has been this good. Plus I think we sound the best we ever have.

Having Mike in the band puts Voodoo Vegas in a fantastic position to record our 3rd album.

Apropos winter is coming. Is someone of you addicted to “Game Of Thrones”?

Lawrence: Meryl and Me love Game Of Thrones, it’s brilliant.

We travelled to Belgium and Germany for some shows for Easter, we played Massmechelen in Belgium and Koblenz in Germany. It was great. Like I said we love playing on the continent.

In the UK we ear Chocolate eggs as tradition.

MH.de: Ok, here it comes, the political question. What are your views to the “Brexit”?

Lawrence: I think it sucks, none of us in Voodoo Vegas are happy. We wish the UK were staying in Europe. A lot of people who voted leave have probably hardly left the UK and if they have they have probably just visited a holiday camp which would be like a mini UK anyway.

Some people in the U.K have very closed minds.

I really really hope the UK leaving the E.U will not mess up coming to Europe to play shows. I would hate that so much.

MH.de: Last but not least, one question regarding the future of Voodoo Vegas. Can you give me a prospect about your plans for the next two years? Only on tour again?

Lawrence: Lots of touring and playing open air festivals through the summer, we are playing our first shows in Sweden in September and in October we will tour with a big band from the U.S. in Holland.

After that we will begin work on album number 3. So it’s very exciting being in Voodoo Vegas right now.