Hello Christian, I’m Uwe from metal-heads.de (MH) and I’m glad that you take time to answer me a few questions.

MH: Dark Forest was formed in 2002. What did you all do before? Maybe you can introduce yourself and give us a short introduction of the whole band for the visitors of metal-heads.de.

C: Yes I was about seventeen when I formed the band in 2002, I had no experience in music before that, I just started writing songs as soon as I picked up my first guitar and learned how to play it along the way. We’ve had quite a few line up changes since those days, the second longest standing member being the drummer Adam who joined in late 2004. Paul joined on bass in 2008, he’d played in a few bands before and then Josh joined in 2012. He used to be the guitarist in Wytch Hazel and this was his first role as lead vocalist. Finally Pat joined us in 2013 but we’d been close friends for a long time before that. He’d supported the band since the early days and I had an acoustic side project with him called Grene Knyght. 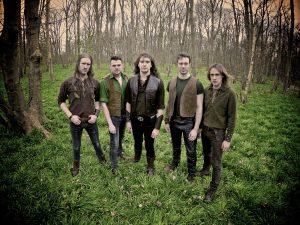 MH: I would say Dark Forest play Power Metal influenced by the New Wave of British Heavy Metal from the 80’s with light shares of folk. How would you describe your music style?

C: I’d say that was a pretty fair description yeah. I always just call it Heavy Metal to avoid things getting too complicated, I don’t really feel the need to put ourselves in a specific sub genre. We like a lot of different styles and they all show in our music but yes Power Metal, traditional, folk, they’re all influences on us to some extent.

MH: Your new album “Beyond The Veil” has a playtime above 70 minutes. This is impressing. Don’t you like short songs? 😉

C: I think it’s just the way you develop as a song writer over the years. In the early days a lot of the songs were around the 3 or 4 minute mark but that was because we weren’t as experienced. These days, if I wrote something that short I just wouldn’t feel satisfied, the song is finished before it’s started. There’s so much music and meaning you can put into a song, it feels natural to make them longer these days. If I tried to write a 3 minute song now it would feel fake and as if were forcing myself to write a short, catchy number for the sake of it.

MH: How does the writing process worked? Which members of the band are involved?

C: I’ve always been the main songwriter but the whole band has an input. Pat and Josh are both good songwriters themselves and they’ve both written sections of this album along with me. Adam is good at restructuring a song or giving advise on how to make it better and Paul always writes his own bass lines after the song has been written.

MH: With “Mên-An-Tol” you have a very good instrumental song on the album? Is it more difficult to write those songs and what does “Mên-An-Tol” means?

C: Not really it’s the same as writing a normal song, perhaps even easier because you don’t have to think of any lyrics! The only thing you have to consider is making up for the lack of vocals with guitar melodies, it has to remain interesting throughout, which is why that song has a lot of different changes. Mên-an-Tol is a group of ancient standing stones in Cornwall, the main stone being circular with a hole in the centre, there’s a great sketch by Duncan Storr in the album booklet of the stones. There’s various legends connected with them including the stones having both healing properties and also a fairy guardian.

MH: The new album has a whole bundle of great songs but for me the absolute highlight is the song “The Lore Of The Land”. The number is nearly 14 minutes. Isn’t it difficult to write such a song without running the risk that it becomes boring?

C: Thanks, yeah it’s easily one of my favourites as well, we are all very proud of that song. I think there is certainly a risk of it becoming boring at that length yes, but when you’re writing, you sometimes have to put yourself in the position of the listener and be very honest with yourself. You have to ask, is this good enough? Is it getting boring? And if the answer is yes then you change it. You have to make the songs as good as they possibly can be and not settle for anything less.

MH: I think the sound on “Beyond The Veil” is very powerful. Are you also happy with the result? 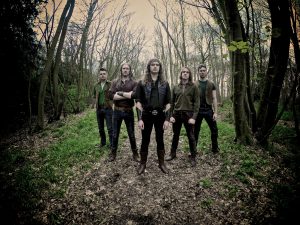 C: Yeah definitely, I think each album for us has got better production each time. It’s been the same engineer, Ajeet, almost every time and he’s been developing more skills and getting better gear over the years too. It’s a good relationship we have, we always get the best results to our ability at the time.

MH: Since the album “The Awakening” in 2014 you have a new vocalist named Josh Winnard. He is a very good singer and I like the way he sing with a rather deep voice. How did he join the band?

C: He did an audition for us when we were searching for a new singer back in 2011. He sent us a recording to begin with and we liked what we heard so we got him down to a proper band practice and he was great. We knew each other already from being friends with Wytch Hazel so we got on really well. He joined in 2012 and we’ve never looked back since.

MH: Til yet – as far as i know – we hadn’t the possibility to see you in Germany. Am I right and are there plans to come to our country? (I really hope that you have plans to present your new album all around Europe!)

C: We have actually played in Germany a few times before. We played Hammer of Doom in Wurzburg in October 2009, also at the same place we played Metal Assault festival in January 2012. Then we opened for Atlantean Kodex in Bavaria last year at Castle Theuern. I’m glad to say we’ll be back this year too, we’re playing Harder Than Steel festival on October 1st and also Hell Over Hammaburg on the 4th March next year.

MH: England has decided to leave the European Union. Do you think that it becomes as a consequence more difficult for English bands to play in Continental Europe?

C: We’ll have to wait and see I suppose.

MH: Finally, do you have a message for your fans and the readers of this interview?

C: Thank you to everyone who has supported Dark Forest over the years and to all the new fans who are just discovering us, we hope you enjoy Beyond the Veil!

MH: Thank you very much and good luck for the future! Maybe we see us soon on a concert!

C: Thanks Uwe, yeah I’m sure you will!