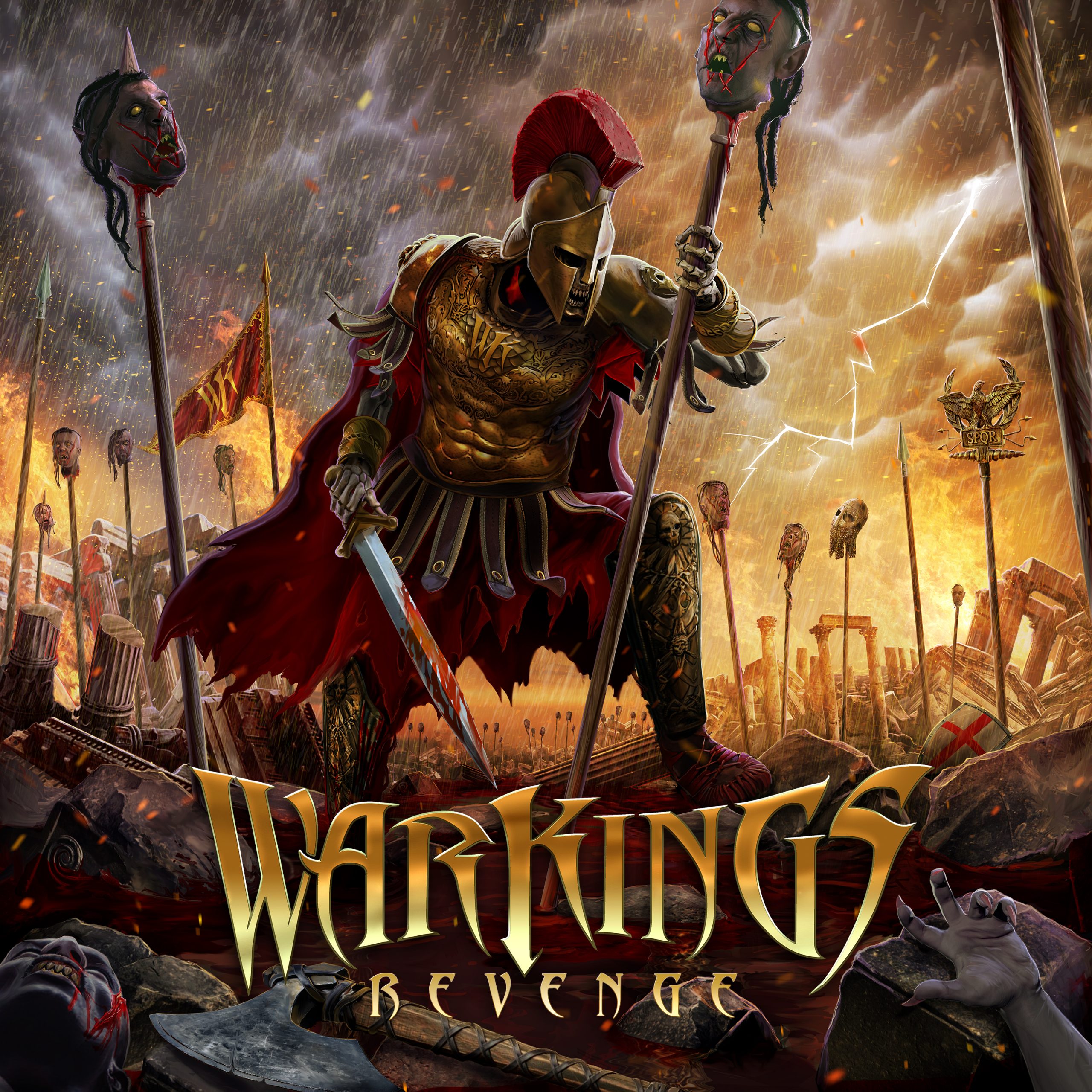 Ready for some pure hero-metal?

The incognito group WARKINGS (Facebook) have put together their second album „Revenge“. And this is definitely a step up from the last album „Reborn“. Yes yes, I know… Nothing new is presented and metal is not reinvented, but I guess it has become quite difficult now. An album has to rock and entertain me. And the new album of WARKINGS can do that indeed.

The riddle of the WARKINGS

The four comrades-in-arms of WARKINGS prefer to remain unrecognized and dress in the robes of various warriors from different periods of time. So you can admire on stage (when the time finally comes again) a Roman tribune on the microphone, a noble crusader on guitar, a wild Viking on bass and last but not least a warlike Spartan on drumsticks. Now there is cheerful mystery about the protagonists behind the masks. The fact is that true professionals are at work here. But there are quite a few of them and it will be difficult to find out who is playing the instruments. With the singer you could get the idea earlier, because voices are often unmistakable. And this voice is indeed very characteristic. Maybe you’ll get the idea… After browsing through my music collection I have at least an idea. I will tell you my guess at the end.

is always a good title and does well in legendary heroic battles. The bagpipes can’t be missed in a Scottish battle of course and introduces the song according to its status and it starts with power. Off to the front with the soldiers! Raise the banners and off we go! With a lot of heroic pride and martial power the warriors advance. And the vocalist with his voice seems more and more familiar… Well, we’ll see what happens. The battle cry „Freedom“ is being shouted out in between. Then follows a short speech part, which is replaced by an impressive guitar solo. That was the first track and it was not bad at all.

So I have to admit that I had to smile a little bit during this song. I can’t really take him seriously, but there’s something about him. The theme is „maximum“ simple, but musically it’s really smart. The guitars sound in all kinds of melodic facets, the vocals transport the whole thing excellently, the tempo changes are cleverly set. The chorus is so easy that there should be no problems at a future concert that everyone in the audience can roar along with it with a proudly swollen chest.

is similar in style to the opener „Freedom“, but goes a little harder and the guitar solo is nicely shredded.

The guitarist is truly a real master. I’d be very interested to know who that is. I have no idea. Because also on the next track „Fight In The Shade“ he heats up fabulously. A truly brilliant introduction to this mighty battle anthem. WARKINGS seem to have a little bit of a preference for the German language, because every now and then you hear the calls: „Schlachtet den Feind!“ and „Schlachtung“. This song is about the battle of commander Varus, who was crushed in the so-called Varus Battle with three Roman legions against the Germanic tribes under the leadership of the Cheruscan prince Armenius. Varus took his own life on the battlefield.

will then drive up with heavy guns. Be prepared for a very extravagant vocal reinforcement. None other than Melissa Bonny (RAGE OF LIGHT and AD INFINITUM) gives this song that special something and makes it the highlight of the record. Watch the video:

I haven’t heard something like this anywhere else so far. Cleaner male melodic vocals paired with heavy female growls is a recipe that I really like. I already liked this very much on the song „Sparta“ from the last album „Reborn“, where Melissa also got her voice on. Here is the video:

Melissa could join the band as a permanent member. That would be a fantastic combination and would give the band a clear speciality.

What else? Lots of great anthems!

„Banners High“ is a slightly slowed down melodic number and I don’t like it as much as the rest, but still good. „Mirror Mirror“, on the other hand, steps on the gas again and gallops along at a brisk pace. Then there’s the mid-tempo anthem „Azrael.“ It’s an impulsive song that carries the listener away with a soul full of pathos. The content is about the crusades towards Jerusalem, which explains the oriental clips. By the way, in the Islamic tradition AZRAEL represents the angel of death, who acts on behalf of Allah. „Battle Of Marathon“ and „Warking“ (also a live-killer with this refrain!), which are in no way inferior to the other songs and end the album worthily.

I admit that I was sceptical and didn’t even want to review the album in the first place, but the WARKINGS convinced me completely with „Revenge“. The song themes are not very original and are often used by many other bands. But in the end it’s all about what comes along musically. And you can’t say that the WARKINGS didn’t do their job very well. The material is really much too high quality for that. There are no fillers here, just hymns. Nevertheless I still see more potential in the band. In this context I must once again praise the guest singer Melissa Bonny. This combination has a huge potential and you should think about using this more often in the future.