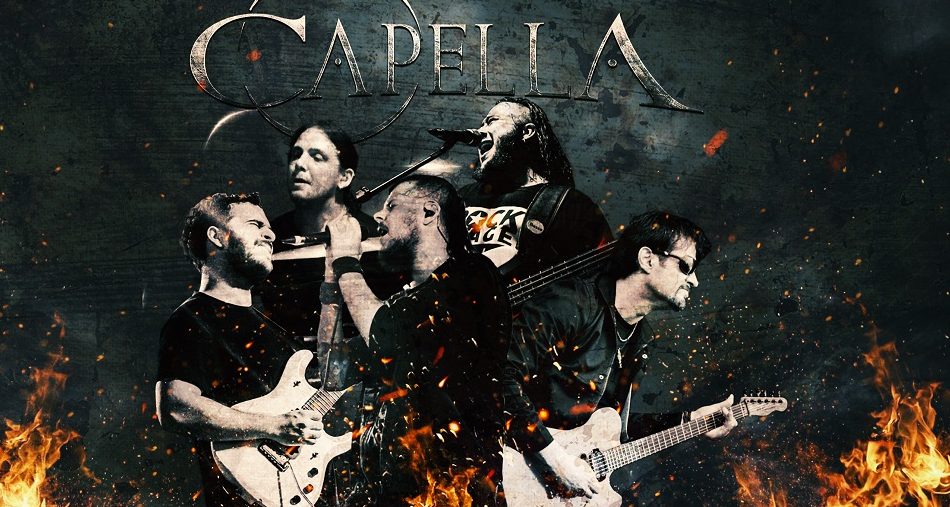 1. Óla Jota, here is Ralf, auditor in chief from metal-heads.de, the German online magazin for all fans of hard and loud music. Please, introduce yourself to our readers first.

Answer: Hallo Ralf, how’re you going? Well, my name is Jota Fortinho, I’m from Brazil and I am 37 years old. I’m the singer of Capella.

2. Capella, the band name, has a special meaning. Not only for Latin speakers and Astronomers. Can you please explain why you chose this star?

Answer: We have a common interest in the mysteries of the universe. And we also find it very interesting one of the „legends“ that surround the star, that an advanced civilization that lived in one of the planets in the orbit of Capella came to Earth at the time of the Egyptian civilization to bring knowledge and technology to help in the technological evolution of the human being. There is a book called „The Exiles in the Capella“ by Edgard Armond which tells this “legend”. I really don’t know if this book was published in Germany and what its name would be there, but it is a very interesting book with a very complex language. So we put together a very interesting theme with a name that has perfect phonetics in any language „Capella“.

3. That´s an interesting story behind your band name. Coming to your band members. Who else beside you is playing in the band?

Answer: Besides my are one the band, the two amazing guitarists Andre “Zaza” Hernandes (ex-Andre Matos band and Angra) 49yrs old and Pablo Romeu 30yrs old, the drummer Fernando Castagna 37yrs old (ex-Scenes From A Dream) and the bassist Gabriel Carvalho , 29yrs old, who also plays in a Brazilian band called “Terra Prima”.

4. How did you met and decided to union as a band?

Answer: It was in a very unusual way. As you know, we all in the band are from Brazil, however, we are all from different regions, we lived pretty far from each other, so while we were in there we didn’t even know each other, so becaus of the distance we probably wouldn’t have a band together there.

But it turns out that by chance we all came to live in Portugal about the same time, as it is a country smaller than Brazil, it was natural for us to meet here. I called Fernando (drummer) to form a band completely from scratch, he introduced me to André (guitarist), and then he indicated Gabriel (bassist) and Pablo (guitarist). After that everything happened very fast, we had a meeting and a day later the Demos of the songs started to appear.Plus, we all get along really well on a personal level.

5. You all are professional musicians. Do you still have other jobs beside your music career?
Answer: No, we all live specifically from our work in music. Eventually I do some work with video production and design, but the focus is on music, that’s how it is for everyone in the band.

6. Your first song and music video ist called „Falling Nations„. Please let us know the idea behind this song and explain the meaning of the lyrics.

Answer: Well, the song was written by our bassist Gabriel. Both the music and the lyrics are authored by him, although everyone in the band contributed in all aspects of the production the initial idea is his. The lyrics have to do with the dark moment that we are living in our society, the whole world is experiencing this emotional and economic instability, violent conflicts and protests everywhere, so the lyrics explore this theme, at the same time that it draws the attention of people, the was still have time to choose the path of peace. The video was produced by me, and I tried in the initial images to draw attention to these themes, the idea was to really shock people. Although unfortunately every day we are getting used to those scenes.

7. Well, we live in a tough world. And most of all this Corona Virus Year 2020 is terrible for all of us. In German media we heard about all the deaths in your lovely home country Brasil that makes us very sad. How was the year so far for you and your family personally, Jota?

Answer: Yes, that’s indeed a tough year. Since I’m living in Portugal I’m not feeling in my skin the situation there, and you know, Portugal is dealing very well with all this pandemic. But my mom and other family members still lives in Brazil which causes me a huge concern for sure. You know, we have probably one of the worsts politics in the world and unfortunately our government is dealing with all this Covid crisis in the worst possible way. That contributes directly on those large numbers of deaths especially among the most fragile part of society, which is absolutely sad. The worst thing is to feel helpless. So we try to put it all down on paper and turn it into music, and keep us positive that all of this will soon pass.

8. Coming back to your band Capella. We deeply hope that in year 2021 this covid-19-desease is defeated and tour life, live concerts and festivals can take place again. How are your plans so far for the upcoming year. When do you start to conquer Europe? Germany has some nice festivals to play like Wacken, Summer Breeze, Dong Open Air or the Rage Against Racism Festival here in our hometown of metal-heads.de, Duisburg…

Answer: Yes, we are planning to start playing and spread the seed as far we can, haha! But since we are a branding new band and we only released one single so far, plus, all these uncertainty about when will be possible to play shows, we still don’t have any show confirmed so far. But we are now very focused on the production of the songs, searching for a good label offer, so we are pretty sure that soon we will have some dates to share with you. About our material, as you know, our initial plan is to release a second single soon and an EP in Dezember with 5 songs. But it can change if we find a label, cause you know, it’s not so usual a label release this EP format, so it can turn out a full album in the first half of 2021. Let’s see.

9. If you have a wish for free for you and your band Capella – what is your wish to become true in 5 years?

Answer: haha This question seems simple, but it’s not. Well, in 5 years, I would love to see metal heads around world banging their heads with our song, and of course, have a chance to hit the stage of huge festivals like Wacken for exemple.

10. Can´t wait to meet you guys and see you play live. Well, our last words always belong to our interview partner. What do you want to tell our readers of metal-heads.de?

Answer: First of all I want to thank you so much for give us the opportunity to tell to all your readers a little bit about our new life project called „Capella“ and to to be the first one to open the doors to us in Germany. We really appreciate that. Thanks to everyone who took some time to read this interview. Join us on our pages and stay tuned cause we are coming with a lot of new great stuff for all of you.

10. Muito Obrigado! Thank you very much, Jota and hope to meet you in person next summer on one of the big German festivals. Best, Ralf

Answer: Danke, Ralf, it was a real pleasure to answer your questions. Cheers, Jota.