Hi there, my name is Amir and I´m working for the German music magazine www.metal-heads.de , which is focussed on – you may have guessed from the name – heavy music. At least we say, it has to include guitars…distortion is our passion.

To tell you the truth, I´ve not heard of the band before! But I met you after many years (knowing you from DEARLY BEHEADED) during a visit in Manchester in early April. We talked about your latest release and it was sent to me. My review is already up on our homepage (it´s in German though). If I was asked, you and your music deserve more attention and so I wanna give you the chance today, to give the people out there chance to learn about your band and music. 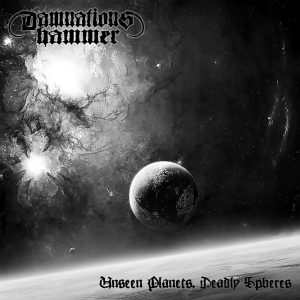 MH: let´s start quite in the beginning. I´d be interested to know, how you got you into starting this band? Who´s idea was it and how did it begin and develop?

TP: I started the band in 2007 actually. I remember seeing Celtic Frost on their reunion tour and they opened the set with „Procreation Of The Wicked“, however they played it deliberatly slowly and it sounded incredibly heavy and menacing – that’s when I realised, this is the style of music I want to play – doom laden metal, however not like a traditional doom band. I was originally a bassist in my former bands so I spent quite a while searching for a guitarist and a vocalist who would share my dream. I couldn’t find any other musicians to work with, so I had to bite the bullet and switch to guitar and begin to write. It’s the best thing I ever did, I opened something inside of myself and found I was able to create riffs and structure songs. The same with singing, I’d never sung before – I‘m still learning what I can do with my voice, however it’s another creative side that I never knew I had.

MH: how much time do you spend in the band, I mean are you rehearsing on a regular basis etc.?

Homework for bass players far away…

TP: We rehearse regularly as a three piece, myself on guitar and vocals, Ady is lead guitar and our drummer is Gary – our bassist Jamie lives 2 hours from the rest of us, so he doesn’t join us unless we have a gig to play. When we’re writing new songs, we record any new ideas as a live 3 piece in our rehearsal room and then email them to Jamie, then he does his homework!

MH: what was your intention to start with this kind of music (regarding DAMNATION`S HAMMER)? In how far have you reached your goal or what are the upcoming plans?

TP: My original goal was to record a demo and play a couple of gigs. Our demo was called „Sepent’s Wrath“ and it lead to a deal with Sweden’s I Hate Records, they released our debut album „Disciples of the Hex“ back in 2013. Obviously now we have a deal with Massacre Records and we’re a regular live outfit – this is something I would have never dreamed of a few years ago! Plans for the future are to record the follow up to „Unseen Planets, Deadly Spheres“ – most of the next album is already written by the way. Also to continue to play gigs, we were fortunate enough this year to be invited to perform at Bloodstock Open Air which was a very cool experience. From the back of that gig, we were announced for Incineration Festival in London 2020.

MH: it took you quite a while, to come up with the latest release after the album, you did before. Can you explain why?

The drummer on a little island

TP: As I mentioned previously, I couldn’t find other musicians to work with for a long time. The drummer on „Disciples of the Hex“ was an old friend of mine, who lives on the Isle of Man – which is the small island between England and Ireland – and as you can imagine that was not very convenient, however he was the only drummer I knew who was interested. We never rehearsed, I used to record guitar parts to a click track then email them to him – he’d then add the drums and email his performance back. That is how we built the songs for the first album. Once the album was released, I realised, that I really need to get into a rehearsal room and jam the songs live. It took a long, long time to find a drummer. I’d known Gary for many years, however he was a guitarist by trade – he contacted me to say that he was interested in drumming and would like to give it a go, although he’d never drummed in a band before! I had no other option so we gave it a try, I’m sure Gary would admit he wasn’t too good at first, however he got really good really quickly! He’s a natural. He saved the band in my opinion.

MH: what are your main influences and did they change in the meantime from the last album to the latest one?

TP: Celtic Frost and Voivod have always been an influence for sure. I tend to listen to classic rock and metal, Rush, Sabbath, AC/DC, Motörhead, Maiden although the influence of those bands may not be obvious to the listener. Inspiration can come from almost anywhere really, something as simple as a chord change in a Pink Floyd song will catch my ear and make me want to pick up a guitar. I’m influenced by certain songs such as Metallica’s „The Thing That Should Not Be“, „Harvester Of Sorrow“ and Maiden’s „To Tame A Land“. I recently heard „Rock Drill“ by The Sensational Alex Harvey Band for the first time, now there’s a song that made me sit up and take notice!

MH: are there any plans for some touring, maybe even in Germany or the Netherlands? Festival appearances in 2019/2020?

TP: Unfortunately we have no confirmed plans to play in Europe as yet, we would love the opportunity though. To have the chance to play the Eindhoven Metal Fest would be fantastic. We’re currently contacting festivals for the chance to play.

MH: what musicians would you love to share the stage with and/or what band would you like to tour with and why?

TP: Wow, to be honest I’ve never really thought about it. I guess if it could be any band then to tour with, then Iron Maiden would be a dream come true! Realistically though, I’m going to say Down. I think we’d be a good match stylistically.

Playing any stage live, but beware of long hair

MH: festival, club gig or big venue? There are various kinds of gigs to play for a band to play. Small sweaty club gigs, big  venues or even stadiums and then these 3-day-festivals in front of 50.000 to 120.000 people. What kind of performances do you prefer and why?

TP: I prefer to play on a big stage, I like to have room to move around and keep out of the way of our bassist Jamie, as he has waist length hair and when he starts windmilling he gets in my way haha! Seriously though, I don’t mind the size of the stage. I’m very passionate about playing live and give it all I’ve got no matter the stage size.

MH: do you have any experiences in playing charity shows like the RAGE AGAINST RACISM-festival in Duisburg? It´s a great thing, positioning itself against racism and of course the participating bands fully stand behind that attitude! Could you imagine to play an event like that? Just asking, as it´s coming up soon and our magazine ist he official media partner!!

TP: Yeah we’d love to play that event for sure. I know the guys in Kill2This, who played this year, they had nothing but positive things to say about the festival. We have done a couple of charity gigs in the past, we played for the Sophie Lancaster Foundation and we performed at Grimm Up North which was the gig organised to help Steve Grimmett from Grim Reaper, who had to have his leg amputated from the knee down.

MH: the final words is always to our interview partners. Here YOU get the chance to tell the people out there something, that you think is important, regarding music in general, the latest album or whatever. So, here weg go…

TP: Thanks for the interest in Damnation’s Hammer and affording us the interview. If you have a chance we’d appreciate it if you’d check out our latest album Unseen Planets, Deadly Spheres. All Hail!

MH: thanx for sharing your time and all the info. I wish you all the best with the album and the future efforts and hope to see you perform live on stage at some point.