Hi John, my name is Amir and I´m working for the German music magazine www.metal-heads.de, which is focussed on – you may have guessed from the name – heavy music. At least we say, it has to include guitars…distorsion is our passion.

To tell you the truth, I´ve been following you for quite some years now, being interested in your work with LONELY ROBOT, FROST and KINO. So now, I also got myself your new release  and reviewed it for our readers. The review (it´s in German though) can be found on our homepage (find it here). As – to my opinion – you and your music deserve more attention, I wanna give you the chance today to give the people out there an closer insight in your work and music. 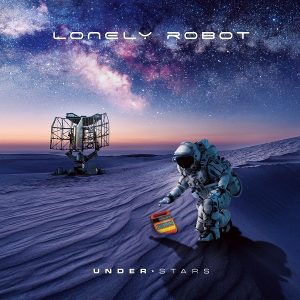 The story behind the trilogy

MH: Please describe our readers how the three parts of this trilogy work together and what the „connection“ is.

JM: The connection or theme running through all three albums is an introspective look at humans as a species. The first album explores why we are so at odds with our surroundings. And seem hell bent on not being at one with it. The second one explores the notion that we might all be part of someone elses dream and not at all a consciousness at all. This album is a bit more straight forward, it’s all about how we have learnt and indeed forgotten again how to communicate.

MH: What is the musical development in between these three albums?

JM: Mainly the production. I have refined the method of making them and in doing so hopefully they have improved sonically. I certainly prefer the overall sound of this one to the first one. This one is also a little bit more synth based than the previous two.

MH: Why did you choose to work with the subject in this way? Others do a 2CD-concept album and are done with it…

JM: Because I’m obsessed with three as a number. Literally. I buy things in threes, I watch three episodes of things in threes, the triangle is my favourite object…the list goes on. It think I could only ever have made three of these albums.

MH: For me as someone enjoying live concerts a lot, I´d be interested, if there is any chance to see you perform this material live any time soon?#

JM: Yes. The plan is to do one big concert in several European countries and perform each album in its entirety. One in England…one in Holland etc…. we’re looking into logistics as we speak.

MH: As you have released your music in various bands and projects in the past…how do you decide, when to make up something new or when to connect the new musical ideas to an already existing band (like KINO oder FROST)?

The man with the KINO hat…

JM: I only write when I have to write. So I don’t have songs lying around which I attribute to different things. If you told me to write a KINO album tomorrow, I would get my KINO hat on and focus solely on that until it was done. I know the subtle differences in my writing style between each project, even if some people seem to want to lump them in together. They all sound different to me.

MH: Do you have further plans yet, as if to do new stuff with KINO and/or FROST (or perhaps even something else/new)?

JM: I don’t have any plans for KINO. That was very much about timing and a desire to do it when it happened and that desire has now gone again. As for FROST*, that is Jem Godfrey’s baby, so it’s very much down to him if and when we reconvene with that. I hope I can contribute again this time around.

MH: Finally our interview partner has the last words. What do you want to tell our readers as a final message for today?

We are all under the stars!

JM: My message…we are all Under Stars…don’t forget to look up from time to time 😉

MH: John, thanx a lot for your time and I really hope to see you around here on tour! First of all, all the best for this release!

JM: Thank you very much.